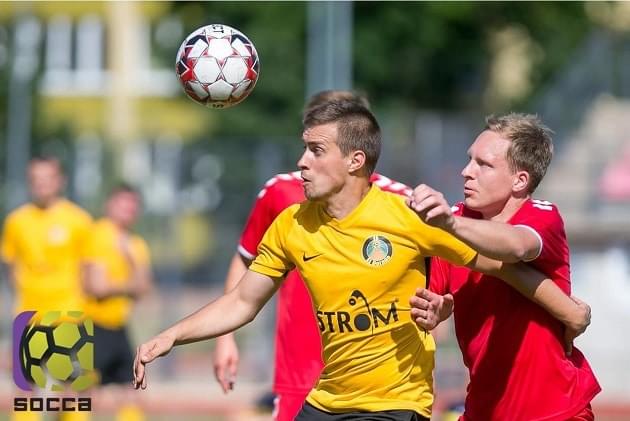 Last Saturday, the Lithuanian minifootball championship continued and the third round was played in Telšiai city.

It was sad that home team FK Telšiai lost both games on their home turf.

But in more positive news. El Dorado continued their successful trip to the champions title and won another two games.

This time both victories were very hard fought. In the first game El Dorado won 2:0 against Varėnos FK Merkys, but the second goal only came in the last minute and El Dorado was  constant pressure from their opponents.

The second game was even harder. El Dorado won 3:2 against a home side FK Telšiai and the third goal from El Dorado was scored just before the final whistle.

All of which means El Dorado has 21 points and are ahead by five points against FK Arsenalas and FK Šilalė – Prolain teams.  El Dorado have already beaten both of these teams so must be a clear favourite to become a new champions, but this will be decided only after the summer break when the last two rounds of matches will be played.

“Both our games were nervous. We won two difficult games and this time success was on our side. In our heads we knew that we gonna play against weaker teams but this was a bad approach for those games so we are glad that we collected all 6 points and now we have our destiny in our hands”, – El Dorado manager Martynas Rašinskas said after the game.

The other team from a Lithuanian capital Vilnius – FK Polivektris faced a hard dose of reality. Before third round they had won all 5 games but in Telšiai they lost both matches and immediately came down to fourth place.

Both losses were very hard for the team. In the first game against Visaginas Inter – veteranai team, Polivektris fell apart in the last minutes of the game. In the space of three minutes  Polivektris conceded three goals and lost by result 2:3.

The second loss was even harder and bigger. This time Polivektris fell apart in the beginning of the game and in the first four minutes conceded four goals from Arsenalas team, including a hat-trick from Jaunius Mikalauskas. This Arsenalas player scored 5 goals totally and helped his team to trash Polivektris by 8 goals margin – 9:1.

In Telšiai city five teams won both their games. Together with mentioned FK Šilalė – Prolain, Inter-veteranai and Arsenalas, SK Linksmakalnis and Jurbarko Imsrė got they gas pedal pressed to the bottom and picked up 6 points.

“Six points and two hard victories. This result is incredible satisfying after a five hours road trip to Telšiai city. We won by a one goal margin against one of the leaders and against one of the outsiders. So this shows that in Lithuanian minifootball championship teams are very even”, – said Visaginas Inter – veteranai player Leonid Gluchov.

Lithuanian minifootball association continues tradition to pick best goals of the round. From Telšiai city round 6 best goals were selected and you can give your vote for your favourite goal by choosing a correct emoji!