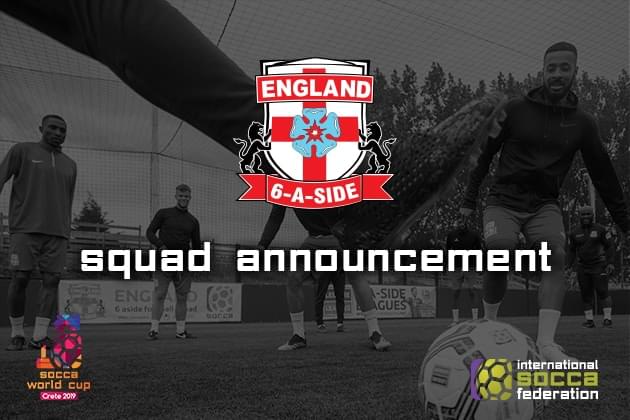 England have become the latest team to name their squad for the World Cup in Crete.

The squad has a new look about it. Only one, striker Dean McDonald, was with the squad for the inaugural world cup in Lisbon last year, which saw England get to the quarter-final stage, losing to eventual runners-up, Poland.The new players, however, have already tasted glory, taking the Home Nations tournament earlier in the year.

Announcing the squad this morning, the boss – who only moved to England in late 2018 after years in the Scotland hot seat – was in hopeful mood: “Myself and Kevin are excited to finally name the World Cup squad heading to Crete in October,” he said.

Although he admitted he was pleased with the quality on offer, he refused to talk about about individuals: “! don’t want to be singling players out, but we have some very exciting attacking players that I hope you know their names during after the tournament,” he smiled.

The 13 players chosen by Manager Jamie Leggett and Assistant Coach, Kevin James to represent their country this October are:

Leggett admitted he was happy with the balance of the squad and added: “We have players that have and do play at high level of non league football and have played in league, big play off finals and FA trophy finals in front of big crowds so this will stand them well going into World Cup.”

But he struck a note of caution when talking about the aims of the squad for the tournament, saying only: “Our aim for the World Cup is too look at our group, perform well enough too get out the group and progress as far as we can go but I will never say going win it but we in the tournament but if we work hard and perform how I know we can…… you never know.”

The World Cup takes place in Crete from 12th October and you can follow the action right here.