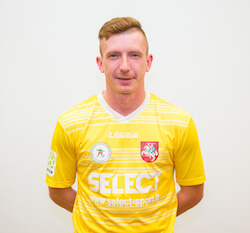 In Lithuania team since 2018. Won a Baltic minifootball Cup in 2018 with Lithuania team. He is the captain of the team. Plays for FK Polivektris in 7-a-side football. Won gold medal of MFL league B division with FK Polivektris in 2018 by not losing any game in the league during the season. Former pro player. Played more than 4 years for current Lithuanian champions FK Sūduva. Played more than 170 game in top Lithuania league, scored 15 goals ad made 31 assist. Also played in Lithuania’s national futsal team and in Lithuanian Futsal top level league. Currently lives in Vilnius.