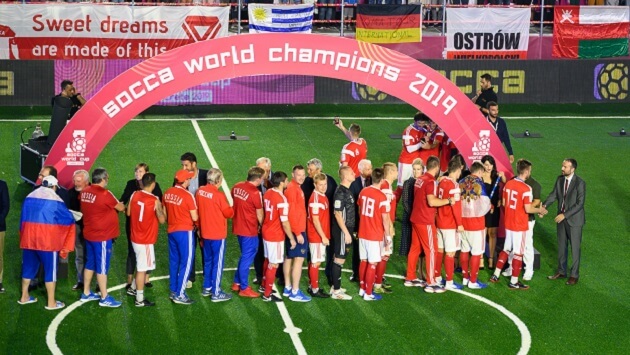 Earlier this week we ran the first part of a wonderful interview with one of the coach’s of the World Cup winning Russian team, Dmitry Smirnov, who piloted them to the incredible success with his brother, Artem.

In part one he focussed on the emotions of the sport, and the discipline required in getting a team to the very top of the world.  Here in part two, the Dmitry focusses on tactics and the opposition, tells us just what its like to work with your brother – and just why he’s not envious of any other team.

You must be the most successful brothers in the small sided game, how did you become involved?

We have been developing this football in our country since 1995, for a quarter of a century. We love our work. And our nation loves this football. After all, minifootball [the Eastern European term for small sided football] is played by much more people than 11-a-side football, Futsal, or beach soccer, all together. At least in our country, it is like that. We don’t have many professional teams and competitions for them in Russia compared to amateur football, which everyone plays according to the rules of small sided football. The main sticking point is only the fact that in Russia, the most popular format of the game is 8-a-side. And every time we prepare a team for an international trip, we have to retrain our strongest players from playing 8-a-side football to 6-a-side football. It is not an easy task. But as you can see, we have learned how to cope with it.

The standard of Socca played was at a very high level at the world cup. Some teams who were relatively unknown to the small sided game and gave a good account of themselves. Which teams surprised you by how good they were or had some tactics that surprised you?

Good question. We monitor other teams, and we watch our opponents, even potential ones, very carefully. We knew what to do with the Polish team in the final, although we must admit that they are very good in this format. I have already said a compliment to the England team. I noted the strength of my rivals. I also want to mention the team from Kazakhstan. I know well the capabilities of this country. I am sure that every year they will bring a very strong team. Who surprised me from newcomers? China.

If there was one player from the Socca World Cup who you could pick to play for Russia, who would it be and why?

Great question! At the World Cup, there were a lot of strong players. I tried to follow many teams and matches, and my assistants have an extensive dossier on many leaders of other teams. But I can answer your question without hesitation: no one. We Are Russia. We are not strong with our players, we are strong with our team, its spirit, Russian character, will-to win, faith in success, and each other. Even the most talented footballer from another country will find it difficult to understand us, and we won’t understand him. And in football, the players must understand each other. Here is an example. In our first match against India, in the second minute of the game, our captain and the most experienced player, Kuksov got injured and was out for the rest of the tournament. Although he, like Ramazanov and Korshikov, never played football professionally, he played more than 50 official matches for our team, the Russian national team. He was a person who we missed in Greece, we played and won this championship for him.

Russia is a very historic and beautiful country. Russia is also a huge follower of all forms of sport. Do you see a time when Russian holds a Socca World Cup?

We are ready! We have a massive experience of holding competitions at the highest level, including international ones. Russia has proved that it can do this very well. Minifootball has official recognition in the Russian Federation.