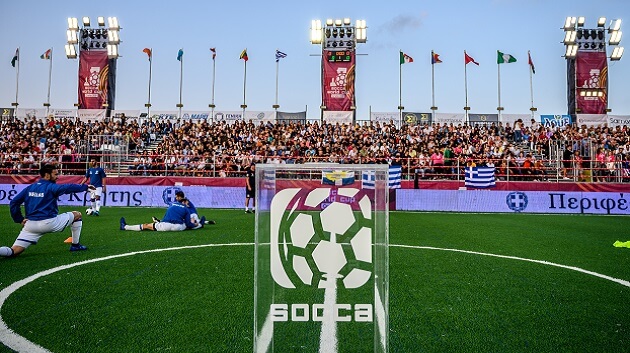 Think about that for a minute. 300,000,000 is a population that only three countries – China, India and the US – can match, and yet that is how many people watched the ISF World Cup 2019 in Rethmyno.

Official figures can now be revealed today that show our sport – that of small sided football – is not only popular with those that play it, but now with millions of viewers too.

200,000,000 people viewed the videos on Facebook, making it one of the highest watched events in the history of non-professional sport.

Those incredible figures only tell a tiny part of the story though.

A staggering 80 million worldwide watched the eight days of glorious action from the Leisure Leagues Stadium right on the shores of the Mediterranean in beautiful Crete. To put that into some sort of context, the BBC (the national broadcaster in the UK) showed its first free to air top division football match for 32 years on Saturday when it aired the Bournemouth v Crystal Palace fixture as part of the Premier League’s much vaunted Project Restart. The peak figures for that were 3.9m of the Saturday night TV audience with lockdown still largely in force.

The world cup matches, by contrast were shown on TV in 60 countries, with giant media organisations like L’Equipe from France, Sport1 in Germany, BeIN in Turkey and many others – including the BBC, who covered the fortunes of the England team.

A delighted ISF spokesman said that even these figures were not a true reflection, as he added: “In this reach we need to add the Instagram, Twitter and You Tube reach which also were several millions of fans, so we are delighted.”

The sport means so much more, though, with the spokesman confirming: “However pleased we are with the viewers, we are more delighted that the sport that we all love has found a way to resonate with people worldwide. We are able to give ordinary people the chance to do extraordinary things, in a spotlight they can only dream of.”

The spokesman added that it wasn’t just the TV and online viewing figures that were so impressive, but the sheer numbers of fans in the stands. “Many times,” he recalled, “we were full and literally couldn’t get anyone else in the stadium, the sight of people watching the games all down the main strip in Rethmyno on big screens because the Leisure Leagues Stadium was full, is something I’ll never forget.”

The ISF commitment to world -class production values, wonderful commentators and even a nightly highlights show, has largely set the benchmark for all other organisations to follow.