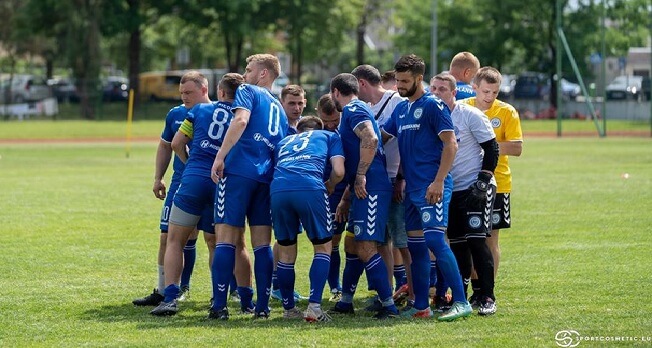 The fourth edition of Lithuanian minifootball championship started this weekend in Šilalė city and all eight participants played the first two games – after the first round there was only one team that won twice,

The team from Jurbarkas city,  Imsrė was the only one that won both games. In the previous year, they finished only in eighth place and now they managed to beat two strong teams.

They won 6:1 against FK Polivektris from Vilnius city and 3:1 against Merkys of Varėna city.

“We are very glad that we are the only one who took all 6 points. In Šilalė we always struggled and haven’t been able to collect all the points here. This time we managed to succeed and the main reason of that was a hard teamwork. We played excellent in the defence and this helped us to won both games” – said Imsrė defender Mantas Murauskas.

There was also baptism for newcomers, a disappointed Merkys and improved results for Akmenė

This year, though, they disappointed a little bit and lost both matches. They lost 1:3 to Imsrė and 1:5 to Kaunas Arsenalas.

The newcomers KKSC Prienai had also had a rough start. They didn’t score any goals and conceded 17. In the first game they were trashed by the home team FK Šilalė-Prolain 0:11 and lost the second game 0:6 to SC-FK Akmenė.

Akmenė managed to show the new face of their team. Last year they collected only one point, but this year they have strengthened enough and collected four points already in the first round of the championship.

They not only beat KKSC Prienai but managed to play a draw against last year’s third place finishers FC Hegelmann. They were near the victory in that game and had a 4:2 lead, but Hegelmann scored two late goals and took one point.

We would like to remind that this year Lithuanian championship will be played in a two-round system so all the teams will play two times with each other. The next round will be played in 11th of July in Jurbarkas city, a home town of a leading team.

The first round results of Lithuanian champinship 2020: