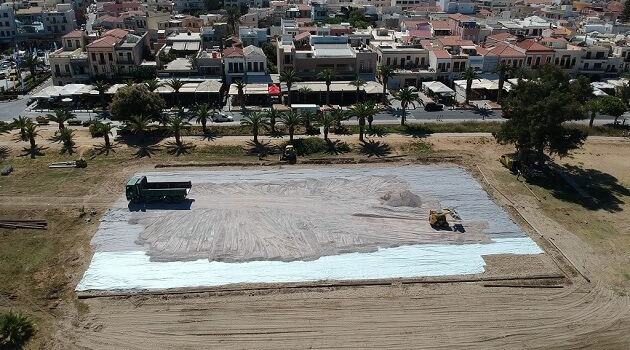 In less than two weeks, the Socca World Cup 2019 kicks off!

On Friday, we were delighted to reveal the fixtures to you, now we can let you see some of the major construction work which will see the wonderful arena spring up on the beautiful beach, right on the shores of the Cretan sea – part of the glorious Mediterranean.

40 teams, the eyes of the world watching on. Thousands of fans, and proud players from ordinary 6 a side leagues all around the world representing their countries – and now the stage is set (almost)

Construction began on the purpose built stadium, which will see fans packed in to watch eight days of the most exciting action in world football, last week and as you can see from this gallery, things are moving on at quite a pace.

Stadiums Director, Tom Nash admitted he was delighted with the way things were going and added: “Everything looks fantastic! The stadium was amazing in Lisbon last time and this is going to be better, I am sure. We just can’t wait to get started!”

After the fixtures were revealed last week, the first teams to use the wonderful facilities will be Latvia and Egypt, while the hosts play Mexico the following evening.