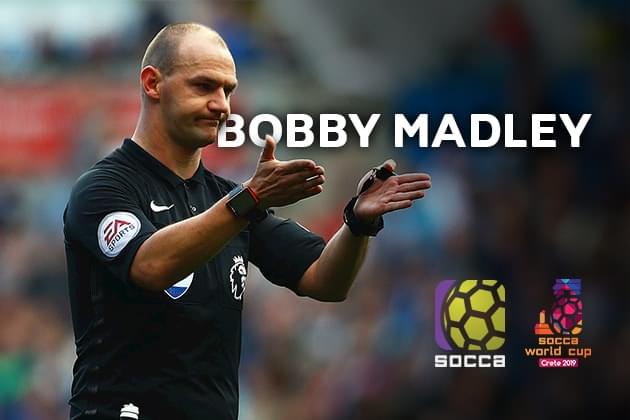 The International Socca Federation is thrilled to reveal former Premier League referee, Bobby Madley as the latest addition to our refereeing team.

Bobby, from West Yorks, was one of the youngest officials ever to announced on the Football League list, when he was taken on in 2010, moving onto the Premier League three years later and being elevated to the Fifa list in 2016.

He began a new chapter in the summer of 2019, when he left the UK and moved to Norway, where he has rediscovered his love of the game.

He will be joining our referees team in Crete, at the World Cup, and here, in the first part of a two part interview (the second will be on the website next week) Bobby tells us that he’s no stranger to 6 a side football – and also explains the differences in the sport compared to what he is more used to.

You have been announced as one of our refs for the World Cup? What was it that attracted you to that? Yes I am delighted to be taking part in this years World Cup. Having spoken to Mark Clattenburg last year and seen the event in Portugal it was definitely something that looked incredibly exciting and something I was very interesting in being a part of.

Have you had much experience in 6 a side as a player or a ref? As a player I have always played socially with my friends at some of the small sided providers and also tried my hand at futsal for a few years as well.

I just wondered, really what the main skills you think are needed to referee a small sided game? I think the skills are similar to those of 11 a side football however with a smaller pitch it is important to be aware that the game is much quicker and more fluid than the larger version and so having a complete awareness of what is happening is very important in the 6 a side game.

And how do they compare to the 11 a side version you are more used to? Possibly answered that above. The 11 a side game allows the game to develop at a slower pace whereas 6 a side football is 100mph from the first whistle to the last, very different in that respect.

This event in Crete is in a purpose built stadium on the beach, have you ever reffed anywhere like that? I have refereed all over the world but never in a small sided stadium such as this. Having seen the video on YouTube it looks an amazing venue and I am so excited to have the chance to officiate in such a superb arena.

Finally the World Cup last year was incredible, in Portugal. Have you had a chance to look at any of the matches? I have. I saw the final won by Germany and I have watched highlights from quite a few of the other games as well. It looks superb! The fans appear to make it quite a spectacle and I’m sure this will be no different in Crete.