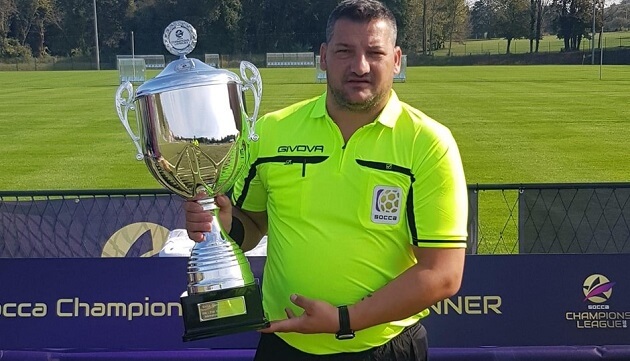 The Champions League has fast become the biggest club event in the World. Countries from across the continent met for a real festival of 6 a side football. Four days of some of the highest standard football anyone has ever seen from club footballers.

It was also a great opportunity to view some of the referees from Slovenia, Croatia and Bulgaria. With the help of key people from their respective countries, the referees displayed some brilliant skills. It was also a fantastic chance to meet the leaders of each Federation. Simon Detellbach, Vedran Prga and Milen Shopov who were all very helpful and very supportive of the event and their referees. The standard of refereeing was also very high and over the weekend we seemed to have all four seasons with beautiful sunshine one day with heavy rain and wind the next, it all added to the event and everyone, including the teams, coped really well with the conditions. It was a credit to the facility, the teams and match officials that no games were delayed or postponed.

The lead referee was Slovenian Ales Muller, a talented ref who is a very popular member of the ISF referee group. Ales represented the ISF in our World Cup in Lisbon and he was a natural choice for the Champions league. He also was chosen to referee in our 2019 World Cup at the Leisure Leagues Stadium on the beautiful Island of Crete.

The next World Cup will have more refs from more countries and as we grow we will continue to support our refs always mindful that our members demand the highest standard possible from our match officials.