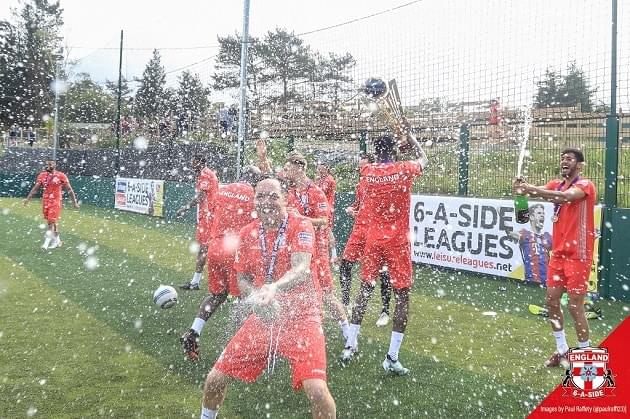 Jamie Leggett’s men won both their games – seeing off Scotland by the odd goal in five and beating Wales 5-0 – while the other game saw Scotland prevail 3-2 against Wales.

A delighted Leggett – who only took over as manager a few months ago – said the team had been excited to put his new ideas into practice: “The boys were ready to see how their training so far was working and to play competitively for the first time together!” he said. “There were a few nerves but once they was out on the pitch they come together really well and the team was all getting stuck in together.”

Dean McDonald who had been the star of a socca penalty which went viral last week, continued his fine form with a goal against Scotland, while Henry Muggeridge and Tyrone Stirling got the others. Against Wales Ahmed Abdulla bagged a brace, Matty Waller notched another and England were helped out by two own goals.

It was the team work in both encounters that most pleased Jamie, as he said: “They had amazing communication on the pitch and each man new exactly what he was doing in order to try and achieve victory.”

However, the perfectionist was also keeping his feet on the ground, cautioning: “Kevin James (head coach) and myself are we were extremely happy with the majority of our teams playing skills but we feel that there is room for improvement and slight adjustment here and there which is totally understandable from a new squad.”

Scotland – who are also under a new Manager in Graham Finlay – had their prolific striker, Joe Andrew amongst the goals, he scored in each of their games, with Lee Wells and Steven Finlay rounding out the scorers against Wales, who had Laurent Mondo and Dean Maynard finding the net against their Scottish counterparts.