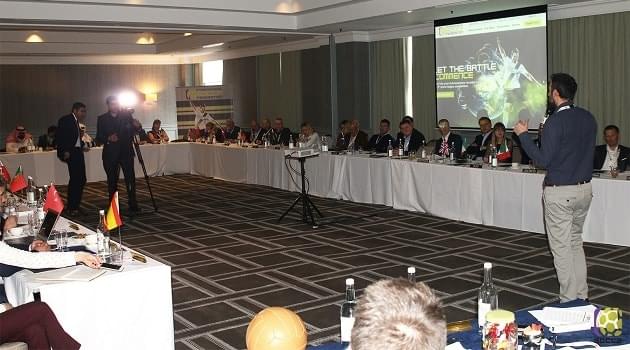 The latest step forward for the ISF will take place in March, with the Annual Conference taking place in Birmingham.

The Socca Federation Executive Committee will be in attendance, with lead Referee Mark Clattenburg, as well as England’s new Director of Football, Ron Atkinson and the new additions to our media team – lead announcer Howard Bentham and Senior Presenter Gary Newbon MBE – all joining them in England’s second city.

Issues to be discussed include a debrief of the first World Cup and Champions League events from 2018, then attention will turn to Crete in the autumn. In addition, the exponential development of the sport, including new countries joining the organisation since its launch and potential future bidders for World events will be under discussion.

A spokesman said: “It is a vital and wonderful opportunity for us all to get together and celebrate the sport of 6 a side football. Although we are all in constant contact, even in this hi-tech days there really is no substitute for doing things face to face and we look forward to the conference immensely.”

The event will the biggest of its type, and will reflect the burgeoning popularity of small sided football in the last 12 months.

The International Socca Federation was only formed in February of 2018, with the spokesman adding: “At that event over 50 guests, each representing an organisation running small-sided football leagues and tournaments in their country, were present. It was calculated that between the organisations in attendance over 1 million socca players were represented – this one promises to to far larger and much more inclusive, reflecting a wonderful world view.”