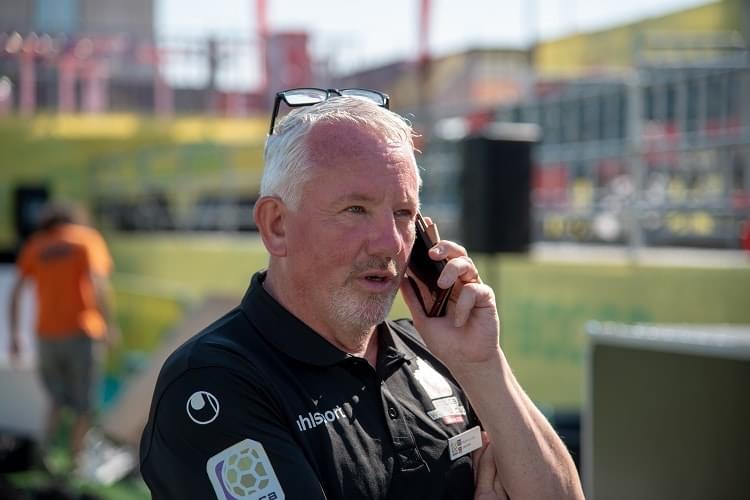 The case of David McNamara made the national news late last year, and now one of our partners, Ref Support has taken the story worldwide.

Mr. McNamara was suspended by the FA for using a game of “Rock Paper Scissors” to settle the issue of who would take kick off before a WSL game between Reading and Manchester City after he left his intended coin in the dressing room.

Ref Support UK, who’s CEO Martin Cassidy (pictured) is also our Referees and Sponsorship Exec, took the plight of the young whistle blower to the Worldwide media when they appeared on BEin Sports with Richard Keys and Andy Gray to discuss the issue.

The veteran broadcasters – staples on TV throughout the Premier League Era – were supportive of the charity and dismissed the punishment handed out by the FA.

That follows on the back of other leading figures who had termed the punishment as “draconian” and the backing had come from other sports too, with top Rugby ref, Nigel Owens admitting he’d done the same thing before a game and urging “common sense” in the future.

Martin appeared via Skype with Keys and Gray and below, you can hear what was said.

The Full interview with our CEO on the Keyes and Gray show. Thanks to beIN Sports for approaching us. #RPS has turned into a national and international story that has struck a chord with refs all around the world.

Ref Support released a statement at the time, which said: “The 21 day suspension of referee Dave McNamara by the Football Association (The FA) for using “Rock Paper Scissors” for the kick off procedure is in our opinion a disproportionate punishment for this offence.

“We believe it was correct to charge Mr McNamara with the offence under law however, we feel a letter of advice would have been more appropriate than a suspension.

“This punishment could result in Mr McNamara missing ten (10) games of the season which is the equivalent to the punishment Luis Suarez received for biting an opponent.

To find out more about Ref Support and how they are making things different for match officials up and down the land, click here: