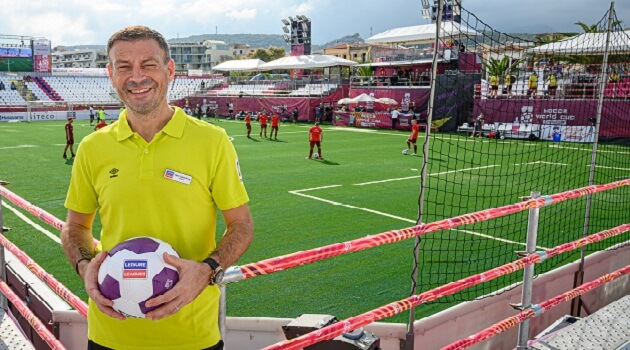 The ISF’s Mark Clattenburg has stepped into the row over the resumption of 11 a side football and asked: Why is no one thinking of the referees.

The North Easterner, commonly regarded as the world’s best match official, was part of the Daily Mail’s “Project Restart” feature and was concerned that the focus of the media had all been on the players.

Indeed, Clattenburg, who refereed the 6 a side World Cup final in Lisbon 2018 and was part of the team in Crete, questioned whether 11 a side football would resume at all: “If it does start — emphasis on the word ‘if’  – then match officials have to be treated the same as the players.”

With many theories as to how the game is going to kick off again in the UK – and mostly because the Premier League owes an eye-watering £762m to the TV Companies if it does not – including moving the games to Australia and playing shorter halves (both of which were floated in recent days)  the former PL ref was keen to remember the officials.

The fragile ecosystem surrounding match officials concerned Clattenburg – who has been working in China and Saudi Arabia as well as doing 6 a side tournaments, since leaving the EPL – and he was worried about the collective safety of officials, saying:  “Just like if a player tests positive, the moment one official contracts coronavirus, it’s game over.” A phrase that would, of course, be literally true in this case.

However, as if to prove, though that refereeing is in the blood, the man who has stood in the middle at some of the biggest matches in the world, still wants more. Champions League, FA Cup and European Championships, as well as other glory nights, like the one at Praça do Comércio that day in September 2018 that saw Germany lift the first 6 a side World Cup in the Leisure Leagues Trunkwala Stadium, is a buzz that he needs, after all, as he admitted: “I would agree to take part, though I know how difficult it would be to have to stay away from my family for weeks on end.”

Like everyone else, the ISF is waiting for news as to when we can begin to reach some sort of normality. While many countries in Europe have begun relaxing lockdowns, the UK office is still closed, with a further announcement from Prime Minister Boris Johnson expected on Sunday.