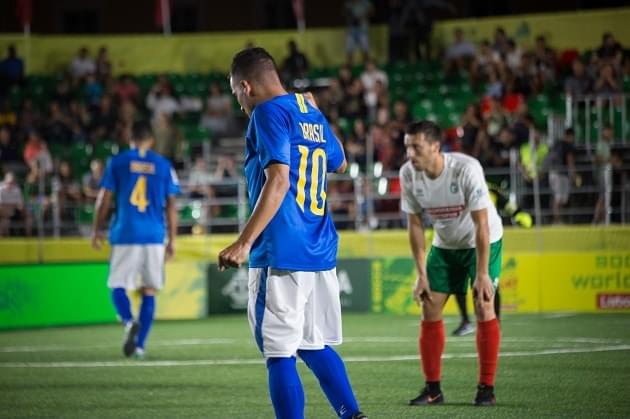 A name surely that has an ability to create excitement in football fans, wherever they are in the world like no other.

When they made their debut in the Socca World Cup last year in Lisbon, they played with all the flair you’d expect from the home of greats from Pele to Neymar.

The side acquitted themselves brilliantly in the groups, winning their games against Egypt, Latvia and Bulgaria before succumbing to an experienced England side in the last 16.

The ISF are delighted to reveal, though, that the Samba beat will be back and ringing loud in Crete this autumn as the Brazil have announced their participation in the 2019 event.

“We will play in Greece,” their chief Fábio Fernandes told us.

And the preparations have already begun, with Fabio confirming that the team will be in Peru this weekend for a tournament that will serve as training for the week later in the year.

Fábio admitted that like all Brazil teams, the Socca version was not planning to go to Crete just to participate. “We go in search of being Champions,” he stated firmly.

“Our team can have a surprise in the event of Greece”.

And Mr. Fernandes hinted that he didn’t just mean on the pitch. “We are in negotiations currently with two international stars.” He smiled. “We will reveal the names when can….”

Whoever they are, they are sure to sprinkle the magic that only the shirt of Brazil can provide.