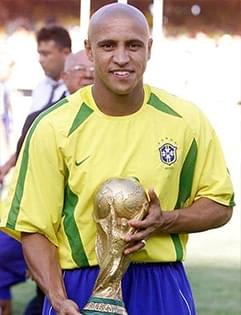 Brazilian legend, Roberto Carlos, has confirmed his attendance at the Socca World Cup to be held in Lisbon, Portugal, opening on 23rd September 2018.

The second most capped Brazilian footballer ever, with 125 caps, he is considered to be the greatest left back in football history and was named by Pele to be in the list of 100 greatest living players.

Roberto Carlos was unable to attend the inaugural meeting of the International Socca Federation which was staged at the Hyatt Regency hotel, Birmingham, England in February due to personal commitments, but has confirmed his attendance in Lisbon and will ceremonially kick off the tournament in the late afternoon before the Brazil 6-a-side team play their first match against Latvia.

ISF Vice-President, Shahzeb Trunkwala said “This is tremendous news that a legend such as Roberto Carlos has agreed to come to Lisbon and shows the status of this new event. Already we have the world’s number one referee, Mark Clattenburg, who will be refereeing on the first evening, and now we also have Roberto Carlos, the world’s best ever left back.  It is going to be an extraordinary opening night.”

Tom Nash, spokesman from the ISF headquarters in the UK also commented: “The atmosphere on the opening night is going to be absolutely incredible. Quite simply, it is going to be the most famous night there has ever been in the world of small-sided football, and to have legends such as Mark Clattenburg, and now Roberto Carlos, at the event just adds to the overall prestige of this first World Cup.”

The multi-million dollar football extravaganza kicks off on 23rd September with the final due to take place on the evening of 29th September 2018.