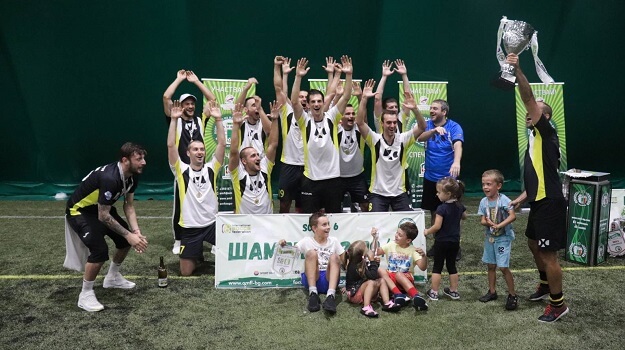 The all-year-round 6 a side league of AMFL – Bulgaria – the official representative of ISF – in the country has crowned its new champion: DXC.Technology. The title was won in a very close battle of highest quality standards and within the most prestigious AMFL tournament. Silver medals were left for the team of AFC Bloka Huniors  and the honour of third place was reserved for the “FC Severozapad 2013” (translated as “Northwest 2013”).

This was the second  full year of the league in Bulgaria, and was a gathering the best small-sided football players of the country. Two games before the ending of the season 2019/2020, there were a total of four teams that had chances to lift the champion’s cup being placed within only 3 points at the top of the table, the three eventual medallists and AFC Dianabad.

Each team had the opportunity to win but in the end, there can only be one victor, of course. The competitive league was, like everything else in the world, temporarily interrupted by the Covid-19 situation, but resumed recently after a three-months break.

It was the first time that DXC Technology had competed, and to win the championships in their debut was an outstanding achievement. The win was preceded by another first place won by the team at the preparatory summer tournament held last year.

The champion, in addition to their gold medals and the cup, has won the grand prize: participation into the next issue of the ISF 6 Champions League, that is to be fully covered by the AMFL. Top three teams are to participate in the AMFL National Finals designated to select the national team which is to represent Bulgaria at the next ISF 6 a side World Cup.