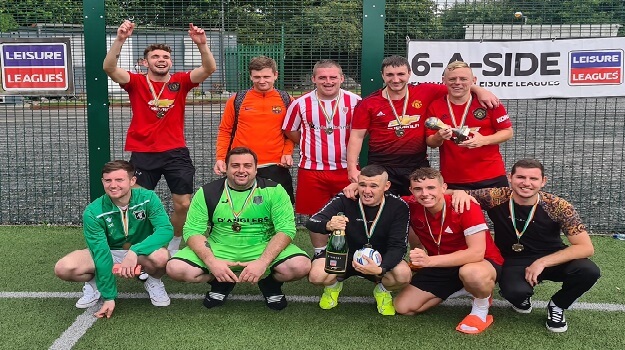 On 1st August 2020 the first qualifiers for the Ireland 6 a side Championship took place in Cork – and Northside set down their marker as the team to beat.

Eight teams played in two groups and in Group A North Side Cork turned out to be unbeatable, winning all their group matches and topping the table with 9 points and a goal difference of 12:4, the second position was taken by FC Migraine.

In Group B, a very similar situation developed, with the leader, FC Miracles defeating all their rivals and with a haul of nine points their goal difference was 7:1, while the battle for second  place was much tighter, because three teams earned three points and thanks to their  better goal difference Rebel Army players left the group as runners-up.

That meant that in the last four, North Side Cork met Rebel Army and FC Miracle were pitted against FC Migraines. In the first game, the dominance was on the North Side, who easily sent the Rebel Army players away winning 7:1.  The second match also without a surprise, and here the Hungarian players of FC Miracles ran out 4-1 victors.

Rebel Army and FC Migraines played in the match for the third place, with the prize on offer that of participation in the grand finale of the Ireland Championship. The beginning of the match definitely belonged to the Rebel Army players, who took the lead 3:0 in quick time, but the Migraines team hung in,  and got down to work, turning the score to 5:4 in their favour, but Rebel Army had the last word. and in the last seconds of the match they snatched a draw.

This meant that the third place would be decided by penalty kicks. Out of the three scheduled strikes, only two were needed, because the Rebels did not manage to defeat the Migraines goalkeeper Bryan O’ Mahony, well known for his performances in the Ireland 6 a side Team, thus Migraines players,  who held their nerve, could enjoy the bronze medal they won and qualify for the final tournament.

The so far unbeaten teams North Side Cork & FC Miracle faced the final – and as they say in Boxing, somebodies O had to go!

The first half the more decisive and effective attacks were from North Side, who secured the result by leading with two goals scored in the first minutes of the match. Their rivals from Miracle failed to break through the tight defence of the of the Cork boys and in which the leader was former Ireland  player Jason “Gazza” Higgins. After the change of ends, the picture of the game did not change much and although Miracles tried to speed up the game and counter rivals, it ended with the opposite effect and they ended up losing 4-0.

Both teams showed a lot of good football that day and the fact that in the final tournament they will not be easy opponents for the future finalists.

Next Saturday (8th of August) the roadshow moves to Galway, where more unforgettable action will surely await us.