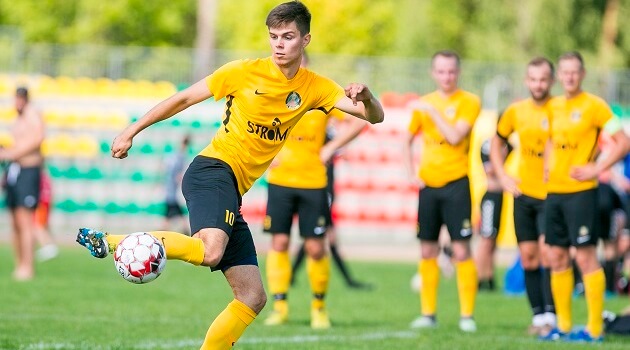 For the first time in Lithuanian minifootball championship history the champion is decided with a game to spare.

In Visaginas city the fortune was clearly on El Dorado side, but they weren’t phased and that now El Dorado  has an unassailable lead despite there being  one round left in Lithuanian minifootball championship.

To secure a gold medals, El Dorado needed not only to win both of their matches, but also to rely on three teams – FK Šilalė–Prolain, FK Arsenalas and FK Polivektris – to lose some points in their games.

El Dorado didn’t have any problems with their side of the bargain, securing victory in both of their games and the universe arranged everything else as they needed.

Firstly, Arsenalas drew both of their matches, then fourth round home team Inter-veteranai came up against previous years champions Šilalė–Prolain and the game ended with a draw 1:1.

Then later Šilalė–Prolain stretched a hand of help to El Dorado and defeated Polivektris 7:4.

So all three teams lost their points and El Dorado extended their lead to 7 points against second placed Šilalė team and now it’s impossible to reach El Dorado in the last round of the championship that will be played on 14th of September.

Even the winners themselves itself didn’t believe that everything would go go so well for them in Visaginas so now they’re thinking about next year’s Socca Champions League tournament.

“It’s hard to believe that we became Lithuanian champions already in this round. We feel very well and it’s a nice feeling to be the strongest team in Lithuania. However, this doesn’t mean that we won’t fight for the points in the last round. We want to shuffle cards for other teams that still fight for a place on a podium. We also are thinking about next year’s Socca Champions League. Of course we will go there because this is the trophy that we still lack and dream about. If can manage to win it next year, we can easily retire!” – laughed El Dorado captain Martynas Rašinskas.

Thee Race For Second And Third Is Still Alive

Despite that champion of Lithuania is clear now, the fight for other colour medals is still alive. There is still five teams that could be on the winners podium if they manage to get good results in the last round of the championship.

Now Šilalė-Prolain (20 pts.) is in the second place, FK Arsenalas (18 pts.) is in the third place and three debutantes FK Polivektris (18 pts.), SK Linksmakalnis (17 pts.) and Inter-veteranai (16 pts.). All those teams can still fight for the medals!

As always, Lithuanian minifootball association selected some best goals of the Visaginas round so everyone can vote for their favorite.

All fourth round results: