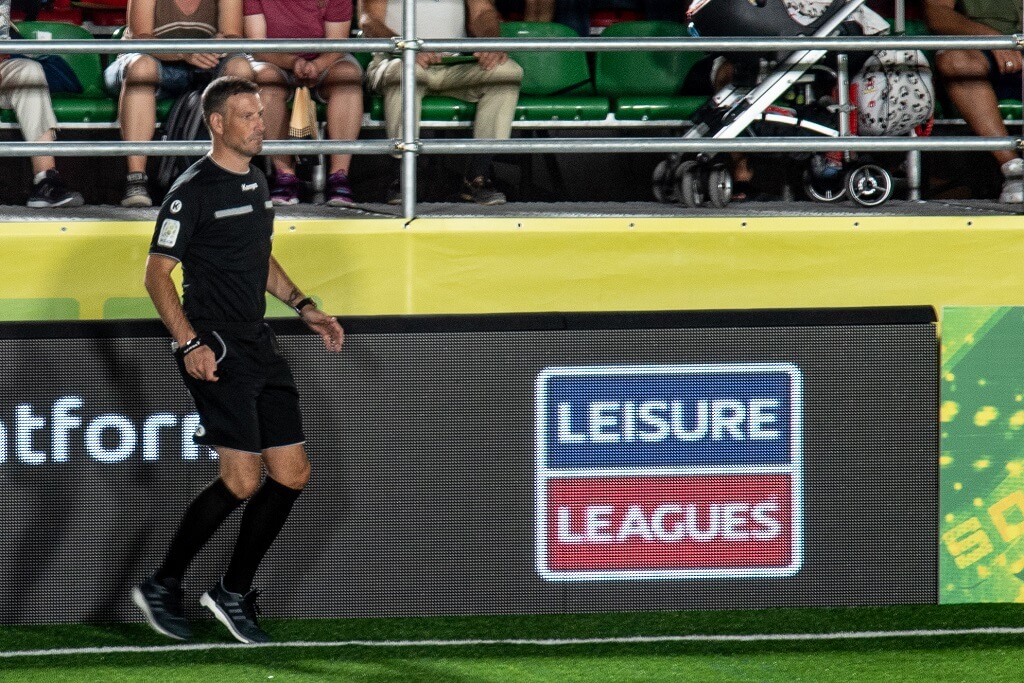 “It’s given me the best days of my life”. Mark Clattenburg is unequivocal as he reflects on his career as a referee, “and I look back on it all with a huge sense of pride.”

Mark was speaking to Leisure Leagues exclusively to celebrate the release of his explosive book “Whistle Blower” and he couldn’t have been prouder of the career that began in North East junior football through the Duke of Edinburgh Scheme, went to the Football League at just 25, saw him on the FIFA list at 30 – and that was just the start.

There were World Cup’s, Champions Leagues’, The Olympics and more over a 17 year career at the top,

The journey which took him from his Consett home to the pinnacle of the sport now finds him working as both our Referee’s Ambassador and in Greece where he is head of referees, which is ironic as it was Crete that provided the backdrop for the last 6 a side world cup that saw Mark referee for a second time at one of our events.

It was an experience that surprised Clattenburg – a man who after all had been used to top end competitions: “It blew me away, if I am honest” he says, looking back. “I thought I knew 6 a side, but I wasn’t prepared for what I saw. The stadium, the fans, the fact there were ordinary men doing this, being the centre of attention like it was the Premier League, I thought it was amazing!”

That first experience, in Lisbon, whetted his appetite for more and after the Crete tournament in 2019 – where Mark refereed the final for a second time – ramped it up further, the pandemic brought everything to a shuddering halt.

Now, though, things are back on track, with Cozumel providing a Caribbean flavour and Clattenburg admitted he can’t wait to go. “It’ll be great to see everyone again, it’s been such a long time!” He said. And we’ve made so many friends over the years. One of these is the Leisure Leagues Lithuania referee Gediminas Mažeika, who like Mark has been a Champions League referee and Clattenburg is looking forward to renewing acquaintances: “He’s a good guy, Gedi, we are a close knit community us refs and I met him at UEFA conferences over the years, he’ll add so much to us again as we push forward.”

The camaraderie of football is something that we’ve all missed, and was brought home to Mark when he took part in one of our first leagues after lockdown. He surprised players in our Walsall Thursday league and it was an experience the man in the middle gained as much from as the teams; “It felt good to be back on the pitch, people had a horrible 18 months with lockdowns and so on, and to see their joy was inspiring, he commented.

Since that day, back in the spring, life has gradually got back to normal and that has included crowds being back in stadiums – and Clattenburg is delighted. “I am looking forward to seeing the fans in Greece” he stated, when we spoke a few weeks ago, “when I’ve refereed out there before at Panathianikos they generate an incredible atmosphere!” He also believes that football needs the passion from the terraces. “Definitely!” He exclaimed, firmly. “We all need it, that sterile football last season was no good for anyone. Fans can shout and say things of course, but that never bothered me one bit! You just feed off that environment.” Clattenburg was also pleased with the changes in use of VAR this season: “It’s been a lot better, in terms of letting the game flow, but we’ve still got to improve the experience for the people in the stadiums as they are often the last people to know what’s going on.” He believes the referees too, need to be stronger when they are on VAR duty. “I think they are playing it a little safe, if I am honest. I think they need to stop protecting each other quite so much and realise that they are there to assist and not reinforce.”

Of course, such things come naturally to some people, they are born to lead, to stand out from the crowd and to reach the top, and no one can argue that he has done that.

However, as he sits in his chair in the media room at Leisure Leagues Head Office he cuts a modest figure: “I just realised I wasn’t good enough to be a player,” he smiles, “but one of my coaches at school suggested I took up refereeing, and I did alright….”

Whistle Blower is out now and we have 10 copies to give away, signed by the man himself..

Keep an eye on the Leisure Leagues social media channels for details.