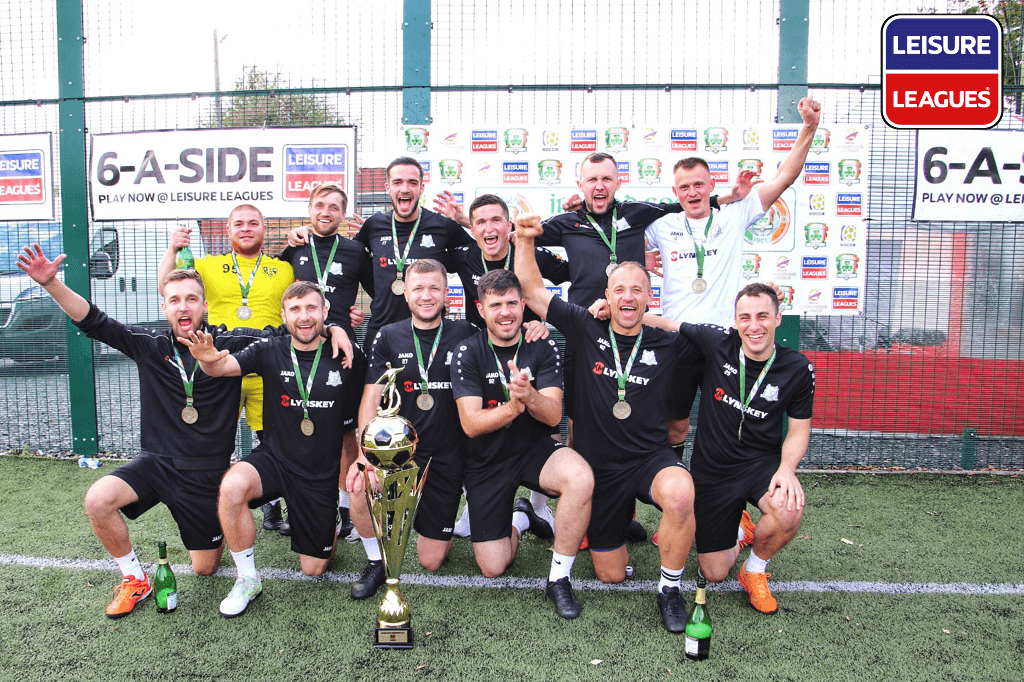 This year, the Ireland Socca championship attracted a large number of teams that decided to test themselves against opponents from all over the country, and the qualifiers of the championship were played in eight counties of Ireland. These included Cork, Mayo, Waterford, Dublin, Limerick, Galway, Kilkenny and Laois, in which 72 6 a-side teams took part. Over the eight summer weeks, we travelled around the country to select 16 teams that faced the Grand Final in Cork for the title of Best Team in Ireland, but also individual trophies for Best Player (MVP) and Best Goalkeeper Ireland Socca Championship 2021.

All teams that won promotion to the final tournament were divided into 4 groups of 4, where they played against each other in 15-minute matches without breaks, and the best two teams from each group were given qualification to the quarter-finals.

Group A was filled by last year’s champions Pericoloso Waterford, winners of the Kilkenny tournament Oeprario IE from Cavan, and Futsamba Naas and Raging Bull from Cork. The players from Pericoloso advanced from the first place, after a rather unexpected draw against Raging Bull, they won the remaining matches and scored seven points, the second place was taken by the players from Operario IE, who collected 6 points, losing only against players from Waterford. Third place went to the players from Futsamba Naas, who at the end of the group struggle dismissed the local Raging Bull team, which had to settle for the last position in the group.

In group B, players from the fourth team of last year’s finals – International Newbridge, Leisure Leagues Cork champions – Lusitania, Baxuss Waterford, and the second team of Polonia Galway battled for supremacy. The winners of this competition were International, who finished at the top of the group B table with 7 points, and the local champion Lusitania, who, like the players from Newbridge, finished the group matches undefeated. Baxuss players from Waterford, who secured 4 points, and Pollonia II Galwaywho didn’t get off the mark, both finished competition at the group stage. 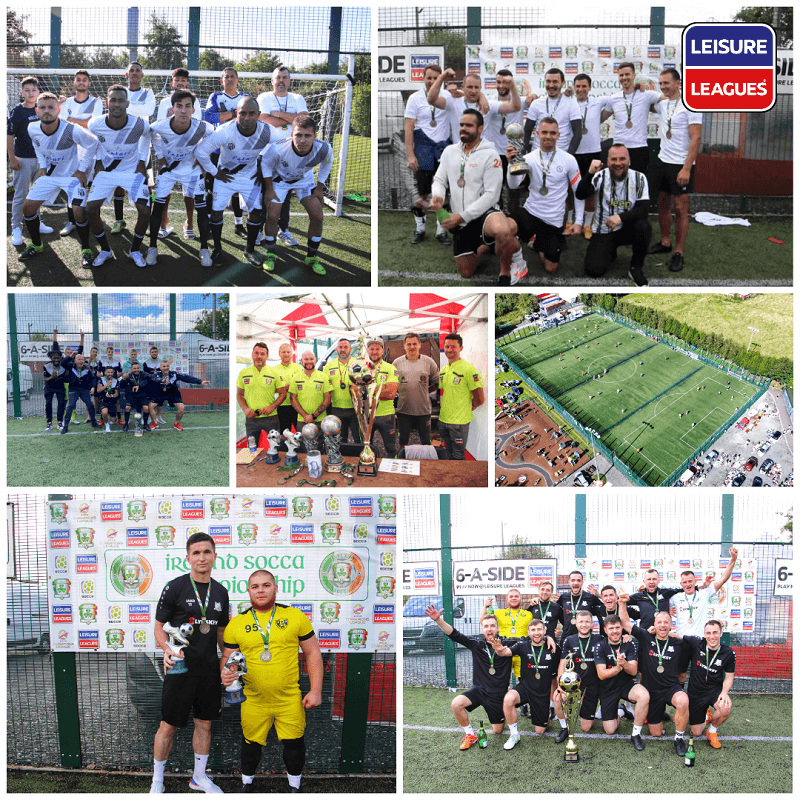 Group C saw skirmishes between Dublin and Galway, namely representatives of the capital FC Viitorul, and Old Boys Blue Magic, versus Brazil In Ireland and Hotshots both from Galway.

Viitorul Dublin and Brazil In Ireland Galway were two undefeated teams in group C that advanced to the quarterfinals, unfortunately at this stage the competition ended with Hotshots Galway and Old Boys Blue Magic Dublin.

The last group, was shot through with quality, with winners of the tournament in Dublin, who were considered one of the favourites for the final success, FC Moldova Dublin, runners-up in 2020 – Polonia Galway, Galacticos Limerick, and Polonia Portlaoise. With a full set of 9 points, Moldova’s players advanced to 1/4 of the championship, and the second place and the promotion had to be decided by the difference of goals, because the remaining three scored 3 points, and here the Galacticos players, who overtook both Polonias – Portlaoise, and unexpectedly 2020 runners-up from Galway.

The quarter-final pairs were drawn on the spot right after the end of the group matches, and the matches from this round were played for 20 minutes (2 halves of 10 minutes).

The first semi-final pair are championship defenders Pericoloso Waterford versus Lusitania Cork. The first 10 minutes were not decisive, and both teams managed to score one goal despite several favourable situations. After the change of sides, the players from Waterford had more advantages, and above all the wide team and experience from last year, which allowed them to beat the also mature, but weaker that day, Lusitania team, which despite the defeat deserves a thunderous applause for their performance.

In the second match, we could watch a very fierce competition and an interesting spectacle thanks to Operario IE from Cavan, and FC Viitorul from Dublin. Although the first half was goalless, there was plenty of action, but the goalkeepers of both teams were equal to the task and did not let themselves be beaten. In the second half Cavan, broke the deadlock  and that meant the end for rivals from the capital, who, despite their efforts, had to come to terms with defeat and thus ended the struggle at this stage.

The third quarter-final is the match between FC Moldova Dublin vs Brazil In Ireland Galway (third place in 2020). The favoured players from Dublin had a serious opponent, and thanks to this the large audience could watch an interesting match of very experienced players with two different playing styles. It was a truly great spectacle and a well-deserved victory for the players from the capital, who once again confirmed that they were interested in the highest step of the podium. Brazil In Ireland players deserve a lot of applause for the spectacular game.

The last pair were players from International Newbridge and Galacticos Limerick. The game was started brightly by the players from Limerick, who in the first part of the meeting took the lead after the impressive goal of the representative of Ireland Socca at World Cup in Crete 2019 – Arron Nunan. The promotion had to be decided by a series of penalties and here the International players, who defeated Galacticos 3:1, proved to be more effective.

The semi-final pairs, as before, were selected by a live draw.

The first pair were players Pericoloso Waterford versus International Newbridge, from the beginning of the match the players of both teams calmly started, but the stakes of the match were very high, the match was even in the opening stages, but in the unlucky 6th minute, two quick hits from Pericoloso players, which actually set the fate of this match, because although there was still a lot of time, and after one of the fouls and the yellow card seen by Pericoloso player, the team from Newbridge played with the advantage of a player for 2 minutes, but they were not able to start a fight with opponents from Waterford, who raised in the second part the lead and the score of 3-0 reported in the grand final, and the players of the International were left to fight for bronze.

The second semi-final was the match between FC Moldova Dublin and Operario IE against Cavan.

Once again the assembled crowd could watch a very exciting match, many goal actions and goalkeeper parades, the first part was a slight advantage of the players from the capital, who by the score 2:1 by the break were one step closer to promotion. After the change of sides, the Operario players  we clearly nervous not  in contrast to the Moldova players, because thanks to the 4:2 win they were in the grand final, and the players from Cavan remained in the play off for third place.

All seats around the pitch were taken and the teams have entered the competition for the title of the best team of 2021. Chances were at a premium in the well-contested encounter, but it was enthralling because it abounded in many goal situations and effective interventions by goalkeepers who were not surprised by the opposing team’s attackers.. After the change of sides, both teams attacked more eagerly, and it was Moldova’s players who took the lead in the 12th minute of the match after a slick move successfully ended with a goal by Alexandru Leu. With five minutes left it was 2: 0 after another hit by Alexandru Leu, who after a quick play of the ball from the sideline did not give a chance with a shot from outside the penalty area Pericoloso goalkeeper – Krzysztof Kleczkowski. This did not discourage the players from Waterford, who in the next few minutes tried to turn the tide of the game, and the best opportunities were three times for Jeff Da Silva, who first hit the crossbar when he tried to lob the goalkeeper, and then twice goalkeeper Moldova (Constantin Catana) saved his team, including after a spectacular shot from half a volley. By the end of the match, the result did not change and the new champion of Ireland Socca 2021 was FC Moldova Dublin. Pericoloso Waterford, this time with the silver medals.

Individual prizes went to the heroes of the finals – FC Moldova players, namely the title of the Best Goalkeeper was won by Constantin Catana, and the Best Player (MVP) was Alexandru Leu, the scorer of both goals in the final match, a great spectacle.