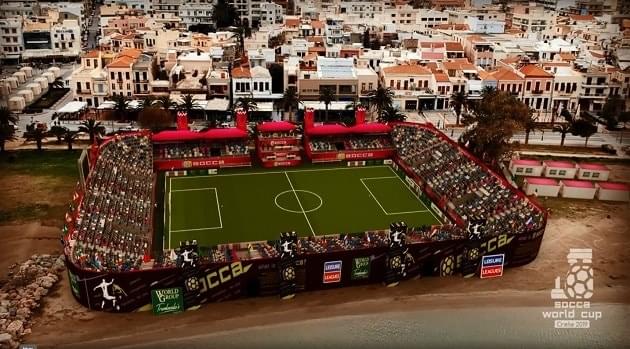 One of the highlights of this weeks International Socca Federation conference in Birmingham was the presentation on the World Cup in Crete.

Between 12-20th October at least 32 teams from every part of Planet Football will descend on Crete for a festival that will showcase all that is wonderful about 6 a side football, both on and off the pitch.

The skill, the sport, but also the camaraderie and the comradeship will be at the forefront of everyone’s minds for the eight days in the beautiful city of Rythmeno.

As preparations continue for the second ISF World Cup, the Greek Delegation was delighted to show the plans for the stadium, which will occupy a stunning beachside location.

Today, we are delighted to share this with you for the first time.

This is just the first of many announcements we will be making in the run up to the Autumn extravaganza.

The excitement is sure to build to fever pitch ahead of the big kick off, when teams will be looking to wrestle the crown from Germany.

The German team defeated Poland in the final last year in Lisbon, to lift the first ever World Cup in the purpose-built Trunkwala Stadium as the tournament was beamed around the world to online and TV Audiences of millions.