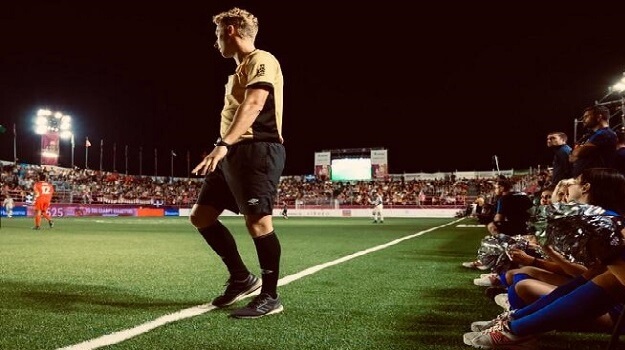 Yesterday, we wrote something about the incredible world cup, the tournament in Rethmyno that captured the imagination of the planet back in the Autumn of 2019.

The tournament did more than just attract massive crowds to the purpose built stadium on the beach, with the Med lapping right up to the stands. Rather in many ways, it seemed to harness the zeitgeist of all that is wonderful about our great sport.

We know the players loved it, the fans, the broadcasters, the coaches – when they weren’t stressed – but what of the often forgotten referees. How was it for them?

Well, our very own Head of Refs, Martin Cassidy is also the CEO of the World’s only independent charity for referees, Ref Support UK, and he sat down with the ISF’s Senior Match Official, Florian Pötter to get his very own World Cup Diary.

We thought you might like to see it too, so here, to help you while away lockdown, are Florian’s personal recollections on that incredible week in Crete.

When my German colleague and I arrived at Rethymno, our first thoughts were: “Ok, we need to see the stadium. We just need to!“ We immediately decided to walk down to the centre piece and heart beat of this whole tournament. We walked along the promenade which had a nice beach and headed towards the sunset, where the stadium was built specially for the tournament.

This was our first remarkable and stunning moment of this tournament. This walk was to become our routine for our time in Crete and our “Game-Day-Routine.“ Each and every meter of the walk we felt the excitement grow and the positive anticipation raised.

As Referees, we had the incredible privilege to have access into the stadium. We went through the tunnel, crossed the sideline and were standing in the middle of this phenomenal and breath-taking arena. We just stood there and looked around. After a couple of minutes, we had found our words and talked about how crazy and awesome this week is going to be. We imagined how this is going to be with over 3,000 excited and happy SOCCA-Fans in it. We got goose bumps, just thinking about it. The feeling was indescribable and there was not even one spectator in it. This was going to be a heck of a week.

After these incredible first moments, we headed back to our hotel and started to prepare. Yes, we weren’t there for holidays. We came to Crete to work together as a team of referees and wanted to deliver 64 games with professionalism, enthusiasm and serious work with the whistle. We started with multiple meetings before the tournament. Discussing the rules, try to find a common line for the whole referee team, how to act on the pitch in different situations.

After these productive meetings it was not only nice to meet old referee colleagues from previous tournaments, but also meet lots of new colleagues and friends for the future. It was incredible that we had Referees from 11 different countries and 4 different continents, yet we spoke one language. The language of Socca. 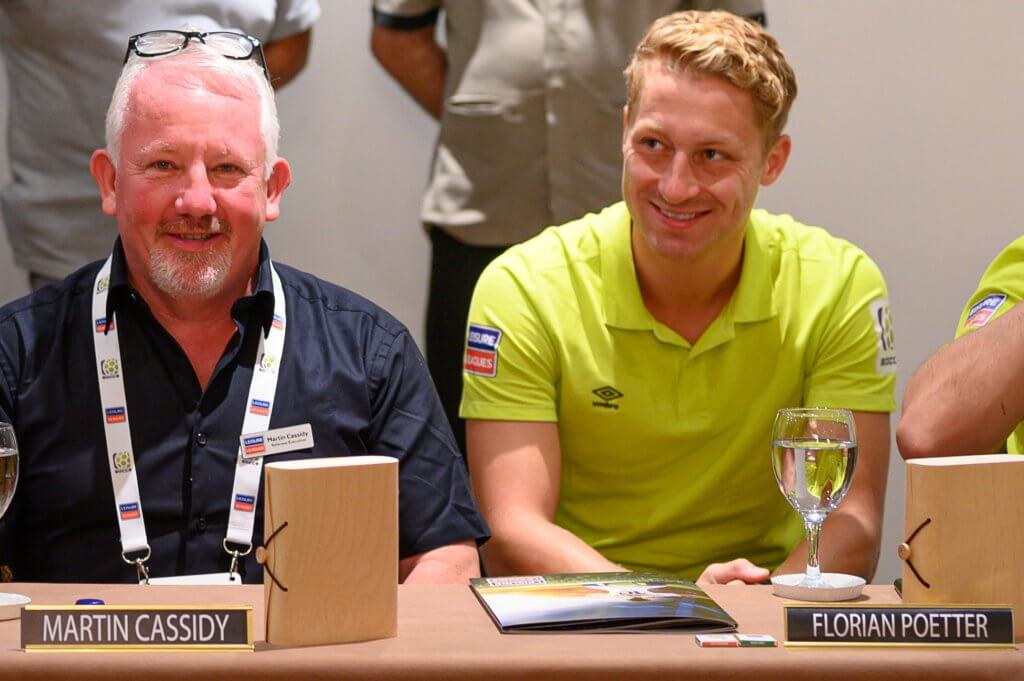 At the next meeting, after all these preparations complete, we went in our delivered equipment from Umbro to the opening ceremony in the stadium. The show was just amazing. With many nice and traditional Greek show acts the tournament was kicked of. But the real highlight of this first evening was the opening game, where Greece played their first match. The stadium was totally full and over 3,000 spectators made an awesome atmosphere and pushed Greece to a first victory.

After this first game we all looked forward to the first “whole“ day of the tournament with more than 10 fixtures. Every day from now on was really packed but also a lot of fun. Every referee had to do about 2-3 games a day, but there was also enough time to spend some hours through the week on the beach and get our batteries charged. We tried to improve from game to game and developed as a team of referees, which I think really worked out.

My own and very personal highlight of this week, obviously except the final with Ex-Premiere League Ref Bobby Madley, was the game between Greece and England in the quarter finals. It was such a crazy game. The crowd was awesome and pushed Greece all the way. But England made a strong and great performance too. So in the end Greece won in the very last second with 4-3. The atmosphere was just unbelievable. I felt like 80,000 spectators were in the SOCCA stadium. Of course this was no easy game for me and my German referee colleague and we need to stay strong the whole 40 minutes, but after the game both teams were fair to each other and to us. They just knew: This was a great game. They played on an eye catching level. Both teams could have won.  In the end the lucky one did. Both teams played awesome and delivered a phenomenal show. That’s what it is all about. This was SOCCA at its finest. And for me the greatest game I ever officiated.

Last but not least: If any official, coach or player from one of the teams will read this, I only want to add one very important thing, which I also said at the ISF conference, which was held in Crete, in front of the coaches, but is often forgotten. The referees do not come to a football pitch or the SOCCA world cup because we are in a bad mood, or want to show all of you who is the boss on the pitch, or have a desire to make you sad or even angry. We are not against you. We are here because of the same reason you are here. Because we love this awesome game in the same way you do.