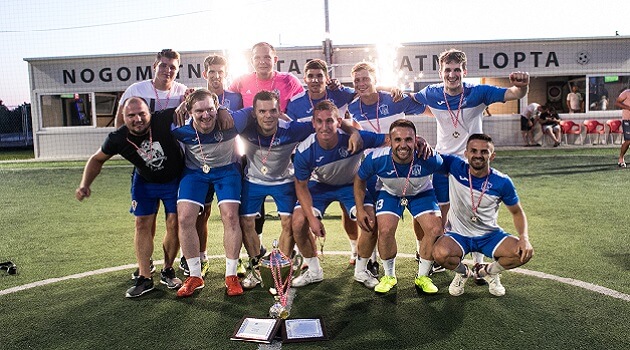 Although the team from Zagreb led 4:3 at the end of the first half, MNK Bjelovar celebrated in the end with a goal by Ante Pavličević to take it 5-4 in the last seconds of the final match.

MNK Bjelovar thus won a place in the Socca Champions League, and the aforementioned Pavličević was also named the best player of this second edition of the Socca championship of Croatia.

“We didn’t expect such success. The final match was very interesting. We entered a little too relaxed, which cost us two goals in the beginning. Then we woke up, played more seriously and deservedly celebrated “, said Kristijan Srbljanović from MNK Bjelovar, who was named the best goalkeeper of Championship.

“The credit goes to the whole team. We entered the finals quite nervously and that could be seen by the result, but luckily we managed to rise and win the title in the last seconds. I hope that we’ll prepare well for the Champions League and that we’ll be competitive with other teams there “, added Ante Pavličević from winning team.

The competition was attended by 12 teams from all over Croatia who presented top small sided football. Along with the winning MNK Bjelovar and the finalists Sobe Apartmani Zagreb, Restaurant Nada Vukovar and Štefan-Kumrovec were among the four best teams at the championship.

Some very famous names from Croatian 11-a-side football, such as Bojan Vručina, Krunoslav Jambrušić and Mario Sačer also took part in this competition. They didn’t hide their enthusiasm for this new version of small sided football.

“I’m glad I was able to attend this competition. It was really well organized and covered by the media. I can say that there is a great future ahead for this type of football. There was no bad team or players. We played a draw twice, so our fate was decided by socca penalties. Although we were undefeated in the group stage, I think we presented good football and I hope to come back next year, ” explained Croatian 11-a-side legend Bojan Vručina, who played for Petgrad from Koprivnica.

”There were several players who could join the national team in the future, and that is just proof that we have quality Socca players in all parts of Croatia. I already have a list of potential members of the national team, which is expanding day by day. Nothing is final yet, it is a long period, we have a lot of time to prepare. In any case, a larger list of players will be needed to choose those who will deserve to play in national team”, the new coach explained in detail.

Croatian Socca Championship went without any trouble, which satisfied the organisers.

“We are extremely pleased that we managed to organize the Croatian Socca Championship in these difficult times of the Covid-19 pandemic. We believe that the competition justified expectations this year. Congratulations to the best teams and we hope that they will successfully represent us in the Champions League,” said Vedran Prga, marketing manager of Socca Croatia who continued: “We have a lot of work ahead of us. The second edition of the HEP Adria Cup is already scheduled for the end of August. It is an international tournament that will host very strong international teams. We hope that the epidemiological situation will be good and that we will be able to hold the competition as it is planned”, concluded Prga.