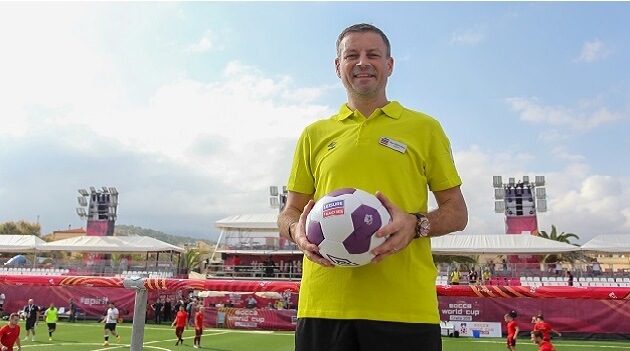 ISF Referee Ambassador, Mark Clattenburg, has tonight announced his retirement as an 11 a side official – at the same time that it was revealed that he will be taking over as Head Referee in Greece.

Mark, who refereed the 6 a side World Cup final in Lisbon and was on hand again in Crete 2019, has been a vital part of our refereeing team since the ISF was formed. Recently he was on hand to train the elite referees in their Zoom Conference last month, as he continued to mentor the best that small sided football had to offer. He had previously told the ISF that he had been surprised at the skill levels on show at the world events, and that the spectacle was “better than 11-aside.”

Tonight’s news brings the curtain down on a glittering 16 year long career at the top level, which saw the North Easterner become one of the youngest officials ever to arrive in the football league, before refereeing in European Championships, Champions Leagues, the Premier League and the FA Cup Final.

After leaving the Premier League in 2017, he moved to Saudi Arabia to become the top referee in the country, replacing Howard Webb. He remained in the gulf until 2019, combining his work in small sided football with a role in the Chinese Super League.

Now he hangs up his whistle in the professional game to take his vital experience to Greece.

ISF Stadiums Director, Tom Nash spoke for the 6 a side football family when he said: “Mark has been an incredible advocate for 6 a side football and for the referees we have. His experience has been pivotal in making the world cup event what it has become, and we are sure that Greek match officials will be even better for his knowledge.”

There will be more on Mark’s career next week.