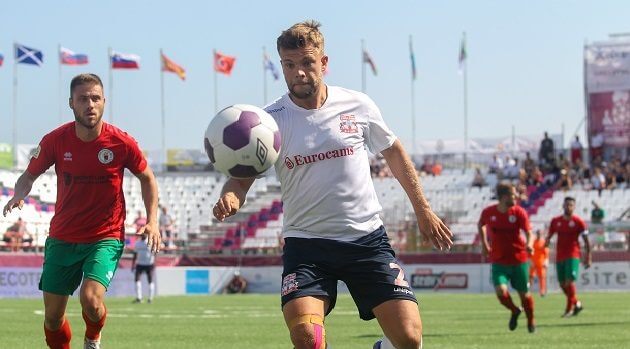 Everyone in the World Socca Family congratulates England player Henry Muggeridge, who has today made the online pages of the biggest newspaper in the UK.

The Sun picked out one of his goals a wonder strike, which you can see below, scored when he was playing for Whitehawk FC in the Isthmian League, just a few below the football league in England.

It was but another glorious goal for the 26 year old, in a season of many highlights, before it was cut short, cruelly, as the FA decided to end most football in the UK for the 2019/20 season, causing huge controversy in the semi-pro game..

The midfielder, who played professionally for Fulham, Charlton and Bristol City in his career, before he turned to coaching youngsters at his Academy, formed a vital part of the England squad which reached the Quarter Finals of the World Cup, losing to Greece in one of the all time classic matches.

As well as that work of art, he notched a couple in the game with Bulgaria, which you can see below.

We’ll be speaking to the man himself next week, to get the lowdown on the goal, but also how he’s getting on in Lockdown, with no football to play!

But to remind you of some happier times, have a look at these brilliant pictures from one of our official photographers, Paul Rafferty, of Henry in action in Crete.