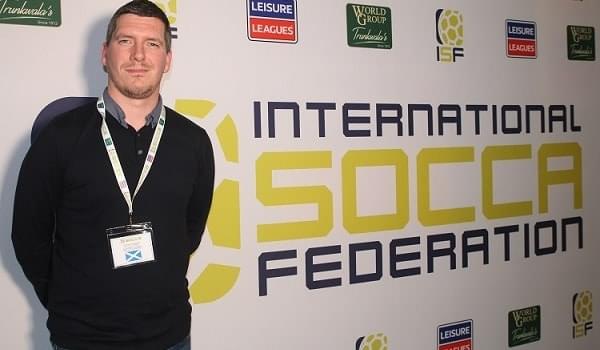 UK Socca is delighted to confirm the appointment of Jamie Leggett as England 6 a side football Team Manager.

Jamie moves to England to pilot their bid for glory in Crete 2019 after a distinguished spell in charge of the Scotland national team. He will work under New Director Of Football, Ron Atkinson, after the former Manchester United boss was announced in the role just before Christmas.

A UK Socca Spokesman was delighted with the appointment and added: “Jamie has proved to be a wonderful coach of Scotland, a team that he galvanised and which plays with heart, passion and no little skill. We are certain that with his effervescent personality and knowledge of 6 a side football, he can do the same for England as we look to really compete on the world stage.”

Jamie replaces Scott Cousins, who resigned late last year and the spokesman said that Jamie was the unanimous choice of the Executives.

Englishman Jamie, from the South East, has given a stiff task, with UK Socca explaining: “We know the talent is there in our ranks, but what we’ve not been able to do is translate that into real, tangible results. It was felt, particularly in Lisbon, that the direction of the team wasn’t what we wanted. The style of football has been a little outdated, in comparison with some of the other teams. We look forward to Jamie, together with Ron in Crete, being able to put a smile back on faces and a swagger in the step of the players.

The England team heads to Crete in the autumn looking to build on a performance that saw them reach the last eight in the first World Cup in Lisbon.

A replacement for Leggett as Scotland manager will be announced in the coming days.