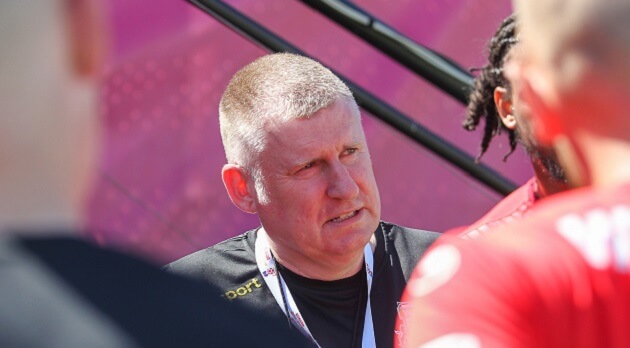 Part 6 of the First Eleven Series – and one of the most experienced coaches in Europe falls under the spotlight today.

Barry John, from South Wales, is best known to all of you as the Coach of Wales at the last two world cups, in Lisbon and Greece – but what you might not know is he is also one of the leading Match Officials in 6 a side football.

With a “foot in both camps” as it were, Barry is the perfect subject for the brand new feature where we get to know each other better.

Here, he tells about a life in football, why he’ll be at the barbers when lockdown ends – and the car he’d spend his lottery winnings on.

There is another reason for talking to Barry in this time, though, as he works for the National Health Service in the UK. So here, he offers his unique perspective on football in the Covid-19 age.

I know you are a proud Welshman, but which football team did you support as a boy?

I started following football when I was about 10 and the FA cup that year was man City v Spurs so I decided to follow the under dogs, I have been a Man City fan ever since 1981.  We doing all right now after a few up and down years

Best game, mind, was Wales 2-1 win of Italy at the Millennium stadium, The Manic Street Preachers played before the game, the atmosphere was amazing.  Goals from Simon Davies and Craig Bellamy securing a famous 2-1 win

As you know I work in the NHS, with what is going on in the world at the moment with this horrible virus it is important to switch off when you are at home with the family, so to relax as a family we walk the dog (a very spoilt golden retriever) , I also like gardening and try to ravel as often as I can.

What did you want to be when you were little?

God that was some time ago! Like everyone I wanted to be Pro Footballer that’s what I kept telling my teachers.  That didn’t work out as planned, but now I am very proud to be Manager of the Wales Socca Team

Who was your best friend growing up?

I moved to Pencoed when I as 7, there were 3 other kids in the street that I grew up with Kevin, his twin brother Jason Beaumont and Mark Harris, I have  known all 3 for 40 years.  We still regularly meet up to catch up on old times.

There is has been so many professional players that would be great at 6 aside so this was very hard to pick a team:

Freedom to do anything, working in the NHS has been really busy, it would be nice just to go to the beach for a walk with the family and dog to unwind. Go out for a meal or to the cinema.

Just to be able to do whatever you want without any restrictions would be great, but we only go do this when it is safe to do so.

Barbers, my hair is over the place, after that take the wife out for a nice meal

What would you spend your lottery winnings on?

There is the million dollar question, it would have to a new house with an indoor pool at the coast, a new car for the Wife, and my son, I would also treat myself to a top of the range Range Rover. I would also buy a house in Florida, been there twice and love the place