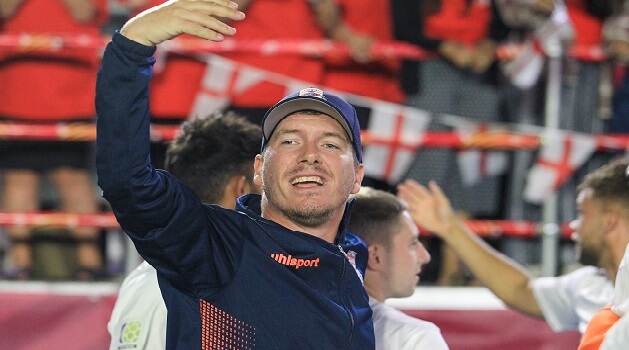 The Football Family collection has brought people together all over the world, as we start to play our great sport again.

There are few people, though, that are as well qualified to be part of this series than this man. Rising to prominence, first as a player with International FC – one of the finest sides on the 6 a side tournament circuit – he then became a Scout, before taking over as Head Coach, leading Scotland to the quarter finals of a world event.

He became England boss after that and has led the side in the two ISF World Cup Tournaments, where they reached the quarter finals in Crete 2019. As well as that, he also runs a successful podcast and finds the time to coach 11 a side.

He is, of course, Jamie Leggett, and here, he tells us about his boyhood team, his dream team of players, and his passion for male Mental Health.

We all know you as a man who loves 6 aside, but let’s go back before that, which football team did you support as a boy? My dad has always supported Tottenham as lived that side of the water, so followed them for a little but as i got older my mum and her family come from Peckham, so I started to go watch Millwall as they all supported them and my friends did as well, so I support Millwall.

What was the first football match you ever saw? If I’m honest I can’t remember, but one game that always stays in my mind for entertainment and drama growing up was playoff semi final at The New Den against Birmingham.

And, growing up, who was your favourite player? I was a winger when I was younger, so loved players such as Steve McManaman, Ryan Giggs, Robert Pires.  My favourite player growing up was the unbelievable Paul Gascoigne.

How did it start for you? I have coached since i was 16 and now I coach youth teams and FC Elmstead. I coached as my dad set up the Bromley youth teams and have always loved seeing players improve and go on to higher levels , I met my assistant manager Kevin James through coaching against him when he was at Dulwich Hamlet which was very enjoyable battles.

What is your proudest moment in the game? In Coaching / Managing, players progressing to higher levels including professional.Managing Scotland and building a squad to go up against best teams in the world. Managing England, winning the UK summer series & UK home nations and taking  England to the  world cup in Crete and reaching the quarter final in our first year as a team,  but  we want to achieve more and will keep looking to do this.

On the playing side, representing International FC and winning national and global titles (5/6 aside)

If you could pick the best ever 6 aside team for you to manage, who would the players would be? I have had to pick two, One for my dream of 11 a side players and one for the England and Scotland players I’ve coached.

To start with the Professional Dream Team:

And the 6 a side team made up of players I have coached at the World Cup.

What have you missed most in the lockdown?  Everything football and just being able to go watch a game. 6 aside on the whole around the world. Seeing & training with the lads – England / FC Elmstead.

Your podcast seems to be going well,  i know you are passionate about mental health, so tell us about it.Yes the Instagram live chats are going very well and I am extremely proud of the way that people have taken to it, men in particular find it very hard to speak openly about their emotions and if anything is bothering them and the effect it is having/had on their mental health, so my main goal was to get men opening up with friendly chats in a very relaxed way.

Originally it was titled #LetUsTalkLive in football, which I thought would help men open up about their issues or past issues and how football helped them overcome some of what they were going through.

A lot of men (myself included) struggle to open up publicly and wouldn’t necessarily ask for help, so by making the live chats more informal and from a friendly stand point i thought that they would be more inclined to open up and allow their struggles to be heard and from that possibly help other men with some soft advice.

I am very proud and thankful for all the men that have already been on the live chat with me and opened up in such a personal way, it shows other men that it is ok to not always be ok and that other people have or is experiencing similar to them.

I am also looking forward to the guests that are coming up in the near future and hearing their stories, I just hope that they are all as proud of themselves as I am of them for their bravery on speaking so publicly and honestly.

Recently i decided that it would be a good idea to include girls into the live chats and so in the near future i have a selection of girls who are also going to come on the live chat and share their stories and experiences with mental health and what they did in order to overcome their issues.

If anyone is interested in taking a look back at past live chats tat i have done, they are all available for public viewing (with the guest’s permission) on YouTube – Mental Health #LetUsTalk  if you could subscribe to that account it would be greatly appreciated.

My social media handles are:

My social media is available for direct messages from everyone, so if anyone is interested in coming on for a Instagram live chat send me a message and we can arrange that, also if anyone is struggling and needs someone to talk too who will remain impartial and non judgemental then please do feel free to contact me via a direct message, I will always be available and always offer all the help and support I can. #LetUsTalk

What would you spend lottery winnings on?

Something in or around football