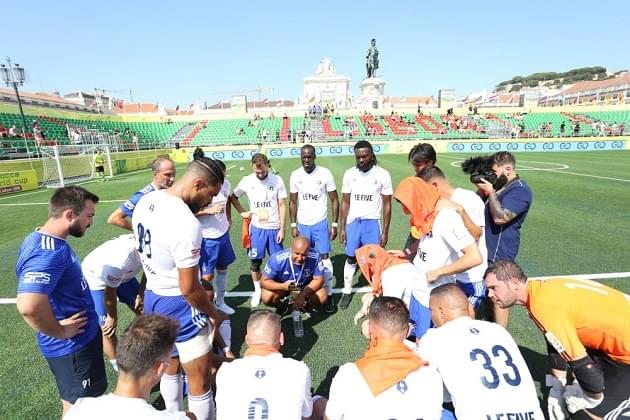 Last week, France became one of the first nations to name their squad for the 6 a side World Cup in Crete.

The team impressed on their debut in last years tournament in Lisbon, and will be looking to build on their last eight showing from 2018, when the kick off rolls around this autumn.

We caught up with France Team Manager, Hugo Da Silveira to discuss the France national teams in particular and 6 a side football more generally in the country – and as you will see, he is in confident mood!

I see you’ve named your squad for the World Cup, what are your hopes for the tournament? Yes I have given my list of the 15 players who will go to the Ridge to defend the colours of France.  More 5 players on the waiting list.  We will go to the World Cup with the hope of being in the top 4 of the tournament.  That is to say, semi-final.  Then we’ll see…!  But the goal is victory.  That’s what we play for first.

Who are the players the world should look out for? There are a lot of very good players in our team I think.  I would base our style more on teamwork.  I don’t like to talk about individual players. They know that.  Nothing comes before the group.

I wondered if you could reflect on your experience in Lisbon. How did you feel the tournament went?  We had a very good competition.  The conditions set up by the Socca organisation were fantastic and very professional.  Concerning the sportsman we lost in the 1/4 final against Portugal who was at home.  We just missed our game against a very good Portuguese team.  I think we’ve produced some very nice game.  Moreover, many nations came to congratulate us.  Thank you all.  But we also want to win.  Like 31 other teams, right?

Has the experience in the World Cup improved your players do you feel? It’s obvious!!!!!  I think the players have learned a lot.  We kept most of last year’s players while adding 5 new players.  Last year we were eliminated on a very severe red card with 5 minutes to go.  We learned and we’ll come back even stronger.

And finally, how is the development of 6 a side soccer going in France? That’s the most complicated thing for us.  FIVE is a network of multi-sport centres in France.  We have 40 centers. On the other hand, we practice 5-on-5 with fences on the sides.  The fields are much smaller than the 6-a-side football fields.  We don’t have a 6-a-side football culture and infrastructure today, but we are starting to look at it very seriously when we see the rapid and efficient development of the Socca federation