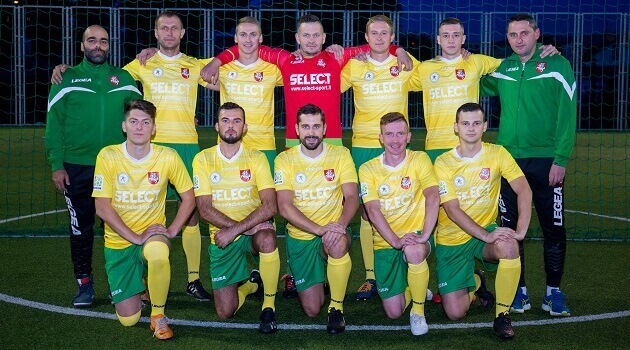 The Lithuanian socca team will soon start preparation for 6 a side World Cup tournament and from tomorrow will play plenty of friendly games against teams from Lithuania.

But before that, Lithuania announced the squad and the new-look coaching staff that will help the team to be in best shape as they can be before the flight to Crete.

The Lithuanian association was very happy that they managed to retain most of the players from 2018 who won Baltic Minifootball Cup for the first time in the history.

In addition to that, three more players joined the team. Striker Aivydas Ruškys returned to the fold. He last played for his country in 2016. Lithuania also add experienced defender Dmitrij Krupovič and one younger player – Ernestas Komorovas who now plays with  Baranovskij in their club side.

However, the biggest addition was in coaching staff. Former Lithuanian minifootball head coach Stanislovas Danisevičius is not at the helm this year and instead, they are being drilled by former pro player from Brazil – Armando Tarlazis aka Mandinho.

Mandinho has a lot of experience playing in native Brazil, Lithuania and also Malta. Now he is focusing on futsal and 6-aside or 7-aside football and is very determined to succeed with Lithuania in Socca world Cup.

“First of all, I’m very honored that I can be part of Lithuanian team and participate in Socca World Cup as a head coach. I’m very happy for that. However, I also feel very big responsibility to properly prepare the team and get the results we want. I have to work a lot, analyse our future opponents and to help the guys to get all that information. I’m already consulting my former coach in Brazil, who was in the reigns of Brazilian team in Lisbon last year, so he gave me some advice already. I watched all the games from last year and feel confident that Lithuania can have a good tactics and reach the results we want“,  said the new head coach of the Lithuanian side.

“Even though in Lithuania we play 7vs7, I personally more like 6 against 6 football. All my youth I played that kind of a game, I perfectly know all the aspects and tactics of the game. For me in that kind of a game it’s easier to find free spaces and to play faster football. Lithuanian players are very strong physically so I will try to use that. I’m also glad that we managed to retain most of the players from previous year because they have a winning mentality. They won a Baltic minifootball Cup so they know the feeling of winning and they want to taste it more but this time in Socca World Cup. I will try to help them to reach this aim“, added Mandinho.

Mandinho won’t be the only man in a coaching staff. Lithuania will also have physio in the name of Giedrius Brazaitis.

He previously worked in Lithuanian futsal champions FK Vytis and was responsible for the physical shape of the players. He helped Vytis to reach an Elite UEFA Futsal Champions League round and this year he will help Lithuanian national  team to be ready for the battles in Rethymno.

The players who will represent Lithuania are: