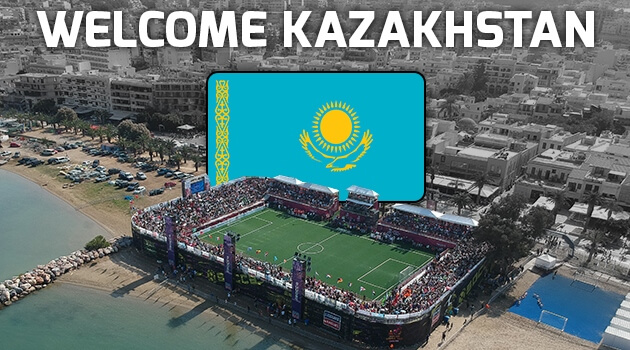 We are delighted to announce there is a brand new license holder for the national team of Kazakhstan.

The new organisation will increase the professionalism of socca in the country and have won the bidding process to take 6 a side forward in the sports mad nation.

ISF Director Hannah Wallis said: “Murat and the Kazakhstan delegation met with our CEO and we are delighted to move the game of small sided football forward in Kazakhstan in the way that we have.”

18 and a half million people live in the country, with borders on the Caspian Sea and with China, and they have a pedigree in 6 a side football, having been a formidable team for many years.

Their previous team reached the last 16 of the Crete World Cup in 2019 losing to Moldova, which was an improvement on the Group Stage exit the year before in Lisbon.

Football is the most popular sport in the nation, more famous for its Olympic Boxing exploits and for athlete Dmitry Karpov, who won a bronze at the 2004 Olympics Decathlon event, however the country is seen as an economic powerhouse from the region, generating 60% of the income for Central Asia.

Now the Kazakhstan team will be looking to add 6 a side glory to their list of sporting excellence.

The venue for this year’s World Cup will be announced at the ISF Spring Conference in March.