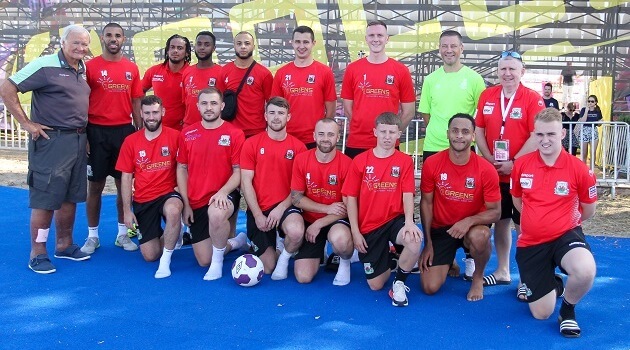 The journey to the World Cup starts this weekend, with Wales getting together for their first training session of 2020.

The hard-working squad, made up of players that proudly represented the country in Crete last year, will be hoping to move forward

The squad will again be helmed by Barry John – who is set for his fifth World Cup in charge – and he admitted he can’t wait: “I am looking forward to getting the squad back together. They have had four months off since we last saw each other in Crete, but I cannot wait to get started.”

Although their striker Tyrell Webbe won the goal of the tournament for his stunning strike against Lithuania, it didn’t go to plan for the Welsh team last year. The experienced South Wales coach knows where it went wrong for the team and what he needs to put right: “We played well,” in Crete, said John firmly, “But our discipline cost us progressing in the tournament. That will be one of the things we will working on this year. We cannot afford to have players in the sin bin as the very best teams will take advantage of us being a player down.”

Now Barry is planning to do his homework to ensure it doesn’t happen again: “I hope to meet up with head of referees Martin Cassidy so that we can discuss what the World Cup rules will be, plus what the officials will be focussing on. We will not leave any stone unturned to ensure that we do our very best at this year’s World Cup.”

The spine of the squad remains the same, but the players mostly come from the Leisure Leagues network in Wales, including the experienced Luke Jones, the keeper from Boca Seniors in Bridgend.

The venue for the World Cup will be revealed at the ISF Spring Conference in March.

The Welsh team from Crete are pictured above with Mark Clattenburg and Ron Atkinson.