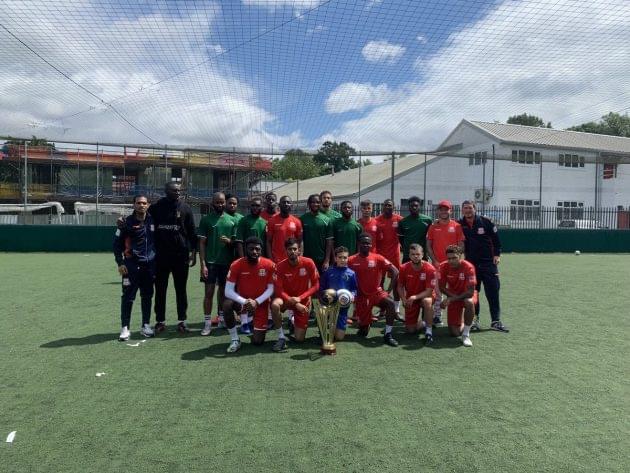 England – fresh from winning the Home Nations championship last month – continued their preparation this weekend, with some professional help.

The squad were joined by a host of stars including Chelsea’s Kasey Palmer – who has spent the season just finished with Derby and Blackburn in the second tier of English football – former England Youth player Zak Ansah, and ex- England Under 19 and current England C player, Blair Turgott.

The star trio were on hand to offer guidance and experience to the England team, as preparations step up. Team boss, Jamie Leggett reckoned the mood in the camp was buoyant and added: “The team are in high spirits.”

Leggett said the session with the top pros was vital, admitting: “We worked on various aspects of the game that we felt could be improved after the home nations tournament, minor adjustments, really. “We want our game to be at its strongest possible level at the World Cup, The team have a massive amount of excitement and energy within themselves and are eager to show off what they have been working so hard to achieve, the home nations victory is a small step but also very important as it boosted team morale and showed them what they are capable of when they work together.”

Jamie was also busy stressing the importance of hard work and commitment to the squad, and in addition to the knowledge of Ansah, Turgott and Palmer he was keen to recognise the contribution of two of his unsung heroes. Kevin James and Terry Riley.

Leggett lavished praise on both, explaining that Head Coach James “does a wonderful job at giving the lads the direction and support they need at every training session” and hailed him as “one of the best coaches within the UK.”

If ex-Charlton player James is front and centre, then the same cannot be said of Riley, as the boss acknowledged: “Terry slips under the radar, but from day one he has been there to supply any help and guidance that is needed. He makes a massive contribution.”