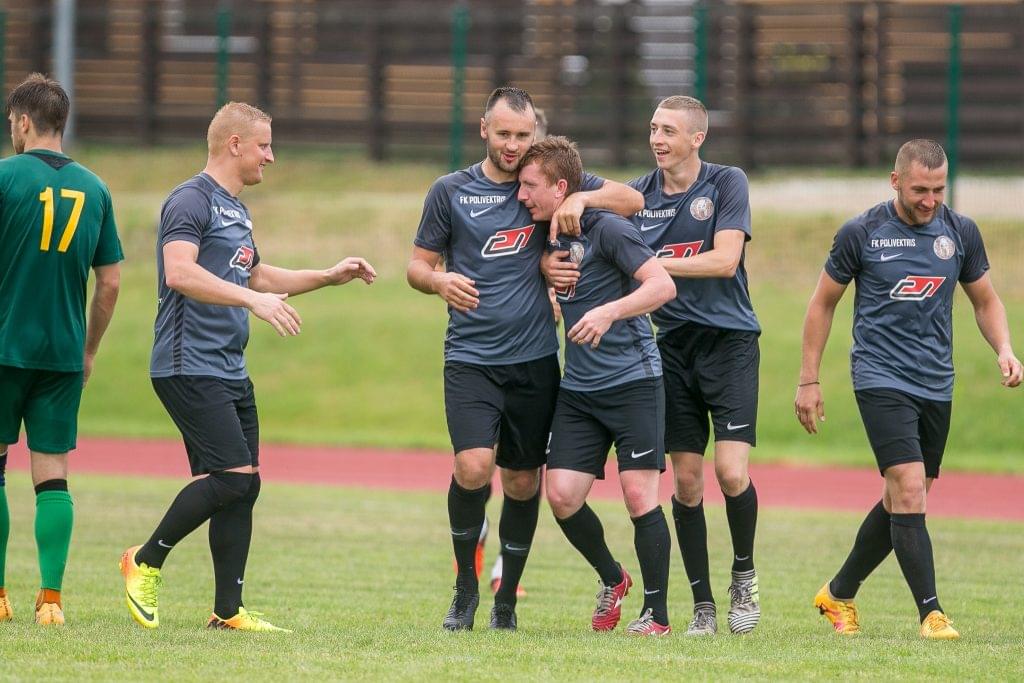 On Saturday again 12 teams from 10 different Lithuanian cities met and battled it out on the Socca field. This time  it all happened in Šilalė city. The second round of Lithuanian minifootball championship was a real marathon, too. During nine hours 6 a side football marathon each team played three games and spent all their energy on the field!

Not all of the teams left Šilalė city completely happy, and some didn’t manage the results they wanted. However, there were two teams from capital of Lithuania – Vilnius, that had the biggest smile after the games were completed.

As we reported last week, there were just three teams that had won all their games after the first round of games. As the second round had completed, this number decreased to only two.

The most surprising thing, perhaps, about this, is that one of those teams are the newcomers FK Polivektris. They won all three hard fought games,. In the first fixture they beat other capital’s team Eagle Team 6:4, other game ended in the same result against SC Akmenė and the last victory was the toughest one, as they prevailed 3:2 against Merkys.

“I don’t know how we managed it, but I think my guys is more motivated in national championship. They want to show other teams from other cities what “Polivektris” is and what we can. We enjoy our game and results. Let’s move forward from this!”, – said one of the teams star men and ex-Suduva Marijampole FC professional Valentin Baranovskij, who scored five goals during this three games.

Just as sensational – but not exactly unexpected –  was the form of El Dorado.

“This was very hard challenge for us. We left our hearts and souls in the pitch. nine points in this round was the best possible target so we feel like winning a cup or something like that. That is a big step forward champions title so I’m very proud of my team and their efforts”, – El Dorado captain Martynas Rašinskas explained afterwards.

Now Polivektris and El Dorado both have 15 points after 5 games and have a 5 points advantage against Arsenalas and Šilalė – Prolain.

Some of the teams tasted victory for the first time in this season. Other newcomers SK “Linksmakalnis” won two games and lost the first one against champions Silalė. Meanwhile FK Telšiai, FK Merkys and Jurbarkas Imsrė won one of their three games recorded their first victories of the season.

On the other side there are still two teams left that don’t have any points. It’s FC Suoliukas ir SC Akmenė. However Akmenė can be glad because their scored their first goals in this tournament. During three games they scored 10 goals and some of them were really beauties.

So talking about goals, there were plenty of them and some was a real top quality efforts. It wasn’t hard to select five best goals, but this round was longer, so Lithuanian Mini Football association selected six best goals of the round and you can watch them below.

All second round results: