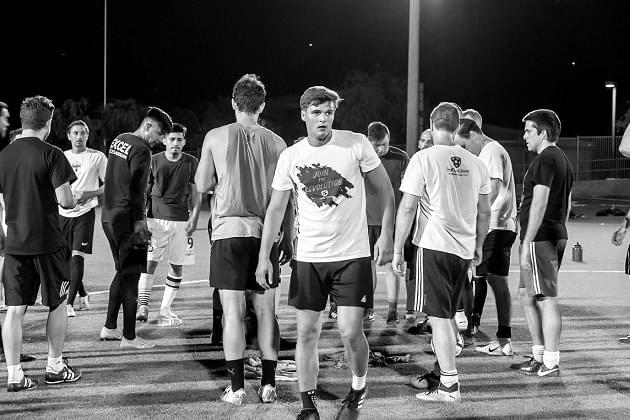 Team USA were one of the surprise packages of last years World Cup in Lisbon.

This year’s preparations are well under way, with their training squad being put through their paces last week.

That being the case, it seems like a great time to catch up with Adam Thelwell, the Team Director, to get all the latest on the 6 a side game and beyond.

How are you guys shaping up for the World Cup?  Preparations behind the scenes have been going on for some time now and we’re certainly ahead of where we were this time last year off the field.  On the field we have just completed our final open tryout.  The talent level went up from last year and the coaching staff are going to have to make some difficult decisions when selecting the squad.  Overall things are shaping up really well and everyone involved is excited.

I know soccer  – and socca – is growing in the US (I watch some of the games  myself on TV) is that something you have found?  Yeah, soccer here in the states continues to grow rapidly.  The quality of our domestic league the MLS has risen over the last few years and the audience keeps getting bigger.  On the grass roots side there’s more and more people playing the game now than ever so that can only be positive for the future of the game here.

What how does 6v6 work over there, is it just in the big cities, what is the situation with leagues and things like that?  our group Small Goal Soccer is the largest provider of 6v6 programs nationwide.  We run leagues, tournaments and events across the country year round in larger cities but also in suburbs and rural areas as well.  There’s something for everyone.  It culminates in our show piece national tournament the “Soccer Sixes”  where the best of the best come to compete annually in Las Vegas for a national title.

Being an Englishman yourself, do you still keep up with the stuff at home and who is your team?  Yeah I watch the footy back home religiously.  There’s a big ex pat community here in the states so lots of opportunity to get together with the lads from back home and watch a game or two.  I grew up in Manchester so of course I’m a Manchester United supporter.

The US women’s team is incredible and women’s football is really growing with this World Cup, is that reflected in the leagues too?  Yeah here in the U.S the women’s game has always been huge from youth to adult play.  The talent pool here is unreal on the women’s side and there’s a ton of female representation in our leagues across the country.

You guys ran the champions of the world close – are you looking to win it?  We were really disappointed of course to go out to Germany last tournament but they were deserving winners.  They were so well drilled and prepared so us knowing we went out to the best without losing in regular time made it slightly easier to take but only ever so slightly.  It hurt!  As far as this tournament I’d be letting the group down if I didn’t say our aim is to win the tournament but we’re a humble, focused group that will treat every country we play against with respect as we were underestimated last year and it got our opponents in trouble so we’ll take one match at a time and see what we can do.