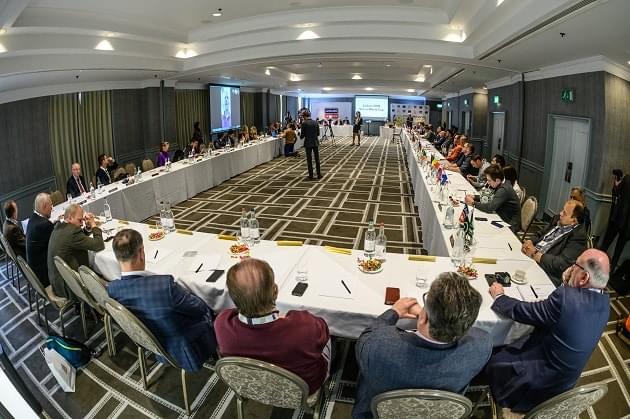 “A resounding success” – that was universal opinion of those present at the International Socca Federation Annual Conference, which took place in Birmingham this week.

Delegates came from every corner of the world to be part of the event, with more joining on Skype as key Executives let the packed room at the Hyatt Hotel in Birmingham know about the blueprint for the future of 6 a side football. .

Executive Chair, Janie Frampton, praised the rapid growth the Federation had undergone in the 13 months since formation. From the original countries that had signed up, there were now 87 who had either joined or were in the process of being approved. Further, Janie gave a long term aim that the organisation should be matching FIFA and their 211 member countries.

Elsewhere CEO Thanos Papadopoulos was able to whet everyone’s appetite for both the upcoming World Cup in Crete and the Champions League in the beautiful Slovenian city of Maribor. Preparations for both are now well underway, with delegates able to see impressions of the stadiums and get a feel for conditions.

The afternoon sessions featured some Q and A’s with the Executives including Julia Colter, who is Tournament Director, Legal Director, Tim Ollerenshaw and Chief Medical Director, Richard Johnson, who each shone some light on their roles as the “backbone” of the Exec team.

Martin and Florian were also able to show delegates the exciting improvements in clothing and also the brand new watches supplied by Limit and the Headset Communications courtesy of Group Comms, which will see the refereeing team wired up for the first time.

After this it was the turn of the welcome special guests. ISF Head Referee, Mark Clattenburg shared his experiences in Lisbon last year at the 6 a side world cup, as well as sharing some stories from throughout his career.

Senior Presenter, Gary Newbon MBE discussed his thoughts on a lifetime in sport on TV, before ISF Director of Football, Ron Atkinson, told some hilarious tales from his decades at the very top.

The former Manchester United and Aston Villa Manager – a veteran of League Cup and FA Cup victories – had celebrated his 80th birthday the day before (“I am forty and forty anniversaries” he had joked with the crowd) and was given a cake to celebrate.

After this it was the turn of Sponsorship and TV Executive, Christoph Köchy who suggested some best practice with members and led them through a sponsorship case study.

The meeting was wrapped by representatives from BUPA and I2C Tennis, both of which can offer myriad benefits to ISF members, and from Leisure Leagues – who are the main sponsor of the ISF – before finally a presentation on behalf of the Trunkwala family of World Group and Leisure Leagues Pakistan, who’s vision and generous benefaction has given so much to the organisation over the last 14 months.