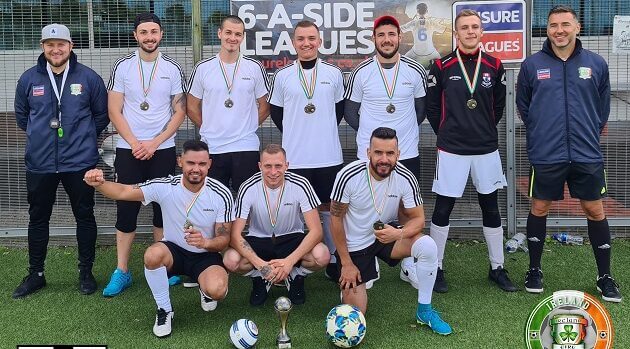 The next stop in the search for the best 6 a side team in Ireland was Kilkenny and the state of the art Watershed Venue where, like in Cork and Limerick, eight teams divided into two groups competed for three places in the finals.

Due to the new government regulations in the country, there was a concern that the day may have to be postponed, but thanks to the courtesy of the host of the venues it was possible to play “behind closed doors”.

In group A the teams from Awaria Tiki Taki, Hit It Baaiii, International and Waterford Vikings competed for supremacy.

The first match, saw the side from Waterford versus the Irish team from HIB, and even at this early stage, we learned that both teams would fight for every point. The match ended with a slight advantage to experienced players from Ireland who edged the game 2 to 1.

In the second match Awaria Tiki Taki (Tiki Taka Breakdown) took on International and the players beat their rivals 2-0, taking the lead in the group A table.

One of the pick of the second round of matches, saw International vs Vikings. Both teams were without a point so it was a game of huge importance.  A typical, hard fought,  game full of twists, ended with a fair draw 1:1. Then it was the Tiki Taka match with Hit It Baaiii, and at stake in this match was qualification and leadership in the table. Hit were marshalled by one of the most well-known in Irish 6 a side football, Damien Raggett  –  who helped them to a 3:1 victory and a certain advance to the semi-finals.

Such was the tightness of proceedings, that going into the last round it was still unknown which team will advance from the second position to the semi-finals. The team from Waterford played against Tiki Taka, where after a very nervous clash, the Vikings team prevailed, beating their opponents 2:1, but they still had an anxious wait for the result in the last group fixture.

The final qualification was to be decided by the last group game, which pitted International with the so far unbeaten Hit It Baaiii, the International team had to win by three goals to advance to the semi-finals and … they unexpectedly defeated the home players 3-0 to the displeasure of the Vikings from Waterford.

In group B at the same time, there was a competition between Hooligans, Emigrants, 07 Mico Football Traveler and Pericoloso.

The first confrontation is with young Irish players from the Hooligans, who took on Emigrants. With the match tied, and despite some tremendous technical ability on the Hooligans side, the Emigrants had the last word and won the match 2-1. In the second match 07 Mico played Pericoloso and here we were surely introduced to one of the final four combatants, namely the Pericoloso team, who easily defeated their rivals, scoring five goals in the process.

The second round and the match of the leader of the Pericoloso group versus Hooligans, here the players of the leader did not have any major problems, eventually winning 6-1 and the secured a spot in the semi-finals.The next game was 07 Mico vs Emigrants saw a hail of goals and exactly the same final result.

The last series of matches meant all to play for, as three teams still had a chance to advance from the second position. At the beginning Hooligans took on 07 Mico and here, the Irish youth had to recognize the superiority of their opponents by losing 1:3, this result giving advance for team led by Croatian manager Alen Miholic. In the last group match, Pericoloso players sent off another group rival, seeing off Emigrants 4-0.

In the first semi-final the leader of group A – Hit It Baaiii, was pitted with the runner-up of group B – 07 Mico, here from the very beginning Raggett’s players set the tone and in the first part of the match they took the lead with two goals.In the second half, Mico’s players tried to turn the game to their advantage, but lost another goal and lost the match 0-3, Hit It Baaiii with this victory not only made the final in Kilkenny, but also secured their participation in the final tournament in Cork.

The second semi-final is a confrontation between the leader of group B – Pericoloso and the second placed in group A – International. The first half belonged to Pericoloso players, who from the beginning of the tournament showed good chemistry, but also speed and thoughtful tactics, thanks to which the first half ended with a score of 2 to 0 for them, although at the very beginning their rivals had a few good situations, but lacked luck. After a short break it got even more interesting, because International players with nothing to lose, were much the better side in the second half. Despite this, the Pericoloso players were better by one goal and advanced to the final.

The match for third place is not only a fight for bronze medals, but also a match for a pass to the final tournament of the championship. International versus 07 Mico was a much-anticipated clash. However, it ended with International players showing how much they wanted to play in Cork and by the break they were winning 5 to 0 After the change of ends,not much else altered, so the well-deserved third place in Kilkenny was won by International, beating their rivals 9:1.

It was finally time for the eagerly-anticipated final clash, with undefeated players Pericoloso taking on Hit It Baaiii. Both teams definitely deserved their place in the Kilkenny Gold Medal match with equal form throughout the tournament. The game was even, with both teams working incredibly hard. Pericoloso took the lead after some very smooth football, but the answer did not take long, and the goal scorer of the equaliser was none other than Damien Raggett himself.

Just when it looked like the result was set, there was one more successful move from Pericoloso players and they were winning with one goal until the break. In the second half, both teams were still trying to play with pressure, the game was at times on the edge, but despite many efforts and attempts, none of the goalkeepers could be beaten, which meant the Kilkenny champion was the Pericoloso team, who won all their matches throughout the tournament, ending the competition with a goal difference of 20:4. Congratulations to the winners, but also to the Hit It Baaiii team for taking the second place and also to the International team for their qualification from the third place into the Cork finals.