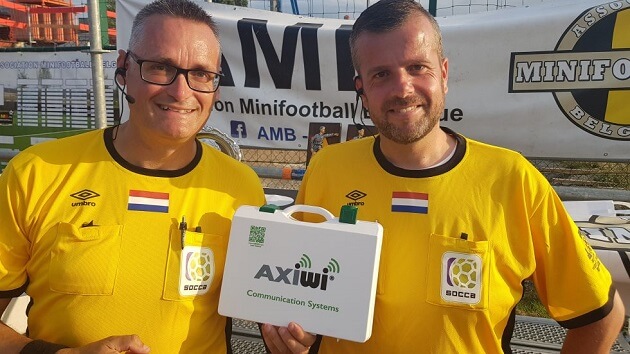 Recently we reported on a tournament in Belgium, the first international 6 a side competition to beat the pandemic. As part of the day, Luxembourg took on the host nation in the Nord See Cup 2020.

Two of ISF’s elite panel of referees, Ronnie Rutten and Jorg Oppers  (pictured above) were selected to officiate the event, and like all our officials, they were kitted out to the highest specifications.

The pair – who were both at the world cup in Crete in 2019 and who participated in the recent training session that was presided over by Mark Clattenburg – communicated together using a system supplied by our official partners AXIWII.

With the need for communication ever more vital in 6 a side football, the duo were using the state of the art AT-350 system, which Ronnie said was: “Fantastic; crystal clear sound that allowed us to communicate quickly and effectively. The headset also has a nice fit with various supplied earplugs.”

Of course in these post-lockdown days crowds aren’t quite the same as they used to be, that doesn’t mean, though that volume is not important, as Jorg added the adjustable nature of the equipment was still important:. “Unfortunately, due to corona limitations, the audience was not welcome,” he said. “So a lower volume this time was sufficient for clear interaction with the fellow referee.”

Partly down to the equipment, both international matches went perfectly with both Ronnie and Jorg stating: While the focus is entirely on the game, you constantly communicate in perfect quality with the colleague unnoticed, as if you were standing next to each other.”

The equipment was used in the World Cup too, with some of the Elite panel pictured with it (in gallery above) and ISF Ref’s Chief, Martin Cassidy said it was part of their commitment to always making sure the referees had the very best at their disposal: “It is vital that we always make these strides,” Martin explained. “We operate the tournaments that set the gold standard, and its working with the likes of AXIWII that makes this possible.”