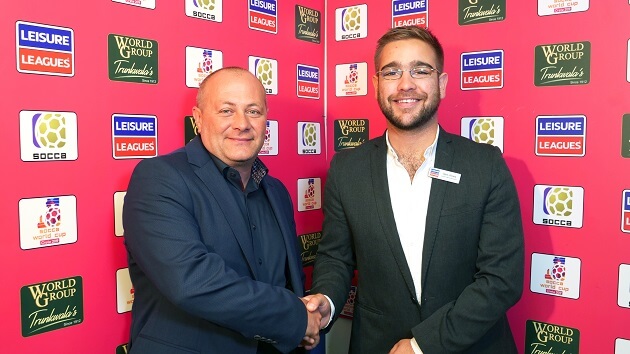 Socca Hungary signed up for their brand new Leisure Leagues Franchise this week with a simple aim: We are going to win the World Cup.

The Hungarian’s impressed at their first ever World championship, the 2019 event in Crete – reaching the quarter finals losing 4-3 to eventual winners, Russia in an epic tussle – but now, says Tibor Csuhai, the goals are set: “We want to be the champions of the world.”

Tibor (pictured with Leisure Leagues’ Sam Jones) admitted he was “amazed” by the set up on the beautiful Greek Island last autumn, adding: “It was an incredible experience, and one we want to sample again.”

After they returned to Hungary, last year, the planning began in earnest. That led Tibor, together with others like Balazs Banfalvi and Janos Szlifka to investigate ways for them to grow the sport of 6 a side football,  which is why they were in Leisure Leagues Head Office last week, inking the deal and undergoing the training that will transform 6 a side football in Hungary forever.

“Many new players will come from the new leagues,“ Tibor confirmed. “They will be invited to try out for the national side. “

The professionalised league network can only help as Balazs added: “The leagues will be very useful in this regard, the fact we can get more people and better environments for them to play in, is going to be really important.”

Those lucky players will be given the opportunity to represent their country in other ISF events – a tournament that Tibor admits he “fell in love” with last year. “It was amazing. Both in terms of the organisation, and the standard, but we showed that we had the players and the heart, now there is a big excitement for the next part of our journey.”

The sport of 6 a side football was already popular in Hungary, with regular tournaments all year round, but now the league network that will be provided through Leisure Leagues expertise, is planned to grow quickly. “We want to start eight by the end of September,” confirmed Tibor. “It’s a tough target, but we have to move quickly.”

The Hungarians have a five year plan, which includes growing that league infrastructure , but also to show their team to be the best in the world. “Absolutely.” Said Tibor, firmly “we have the vision, the leagues are great, but the World Cup is the flagship, and we are going to be the Champions!”

Hungary are the latest country to sign up to the Leisure Leagues model, following the likes of Pakistan and Mexico, there are now over a million players worldwide playing in Leisure Leagues competitions on five continents.

To find out more about the Master Franchises, head to www.leisureleaguesfranchise.net or email Franchise Sales Manager Sam Jones [email protected]