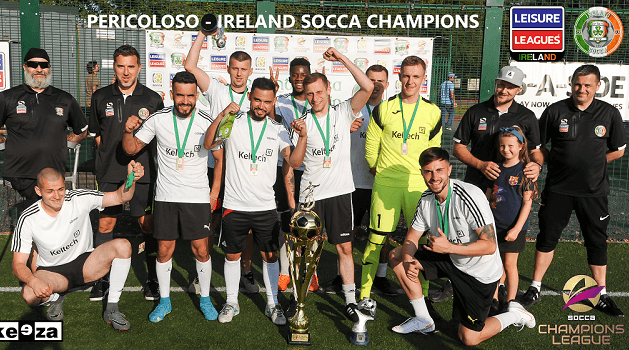 Pericoloso of Waterford were the toasts of all of Ireland as they scooped the first Leisure Leagues backed Ireland 6 a side Championship.

The first finals of the Ireland 6 a side Championship took place on a sunny Sunday morning at the Carrigtwohill facilities in Cork, the beautiful weather attracted many fans from all over Ireland, from faraway Ballina to Waterford, as well as Leisure Leagues players from across the country.

The competition was fought not as originally assumed in three groups of four teams, but in two groups of 5 teams, with the first and second positions at the end of the group games qualifying for the semi-finals.

In Group A the teams International Newbridge, Made In Brazil from Galway, the second team from Polonia Limerick, Old Boys Blue Magic from Dublin, and Rebel Army from Cork competed.

The third qualifying team in Kilkenny, International Newbridge players, became a dark horse in the group A. They won successively against Old Boys Blue Magic, Rebel Army, and even against the favorites of the whole tournament the team Made In Brazil, only the players of Polonia Limerick II managed to take away two points by drawing 1:1. International players were the first team checked into the semi-finals taking first place in the group with 10 points.

The Brazilian winners of the tournament in Galway had to fight for qualification literally to the last minutes of the group match against the Old Boys team from Dublin, despite a great start and they won with both Polonia Limerick II and Rebel Army players, but after the defeat to the International team, they had to score at least one point in the last match to snatch second place, they managed to do this after a draw against Old Boys team and despite the same number of points as the Polonia Limerick II team, they took second place thanks to a better aggregate score,

The third place was taken by players of Polonia Limerick II, who managed to score 7 points, defeating Old Boys and Rebel Army and tied with International. The fourth place was taken by Old Boys Blue Magic Dublin players, who, despite the huge support of their fans, collected only 4 points in the group by winning with Rebel Army and tied with the Brazilians, despite this they deserve a lot of applause for the wonderful atmosphere they created during the tournament. The Rebel Army players from Cork finished the competition in the last place with a zero points, who received a solid football lesson from much better prepared group rivals.

In group B, players from Polonia Galway, Pericoloso Waterford, Hotshots Galway, Migraines FC Cork and Polonia Limerick faced each other for a route to the semi-finals.

Polonia Galway started the competition with a victory with the local Migraines FC, then they won 3:0 against Hotshots team and 5:0 with Polonia Limerick taking their scoring into double figures without conceding.

Pericoloso eventually did breach the defences of Polonia’s goalkeeper Adam Witych, but even this goal did not manage to stop the fast, attacking  players from Galway, who won the group competition with a full 12 points and advanced to the next stage.

Qualifying winners from Kilkenny. Pericoloso Waterford, just like Polonia Galway, started with a win and followed it with more against Hotshots, Polonia Limerick, and Migraines, and only Polonia Galway stopped them by winning 2: 1, here there were no unknowns how in the group A and it was clear who advanced to the semi-finals.

The rest of the teams in group B managed to win only 3 points and it was the goal difference at the end of the competition which decided where teams were placed, so Hotshots Galway took third place with the best goal balance, Migraines FC finished fourth , and Polonia Limerick ended up in the last fifth position, to their huge disappointment.

In the first semi-final, the teams that competed in qualifying in Kilkenny met, which meant an eagerly awaited clash between the brilliant International Newbridge versus Pericoloso Waterford, the first part of this game belonged to the team from Newbridge, which managed to take the one-goal lead and maintain this advantage until half-time.

After the change of ends the determined Pericoloso players started to push harder, but International managed to neutralize these attacks until a sin bin for Newbridge. Pericoloso used this advantage ruthlessly, scoring three goals at the end of the match and they were now  the favourites to win the tournament.

The two best qualifying teams in Galway met in the second semi-final and it was a chance for a rematch for the players of Polonia Galway after their defeat in the final against Made In Brazil in the qualifiers.

The first half was very close, neither team wanted to take risks. Again in the second half, the pattern remained and the sides were, and although Polonia took the lead, they could not keep this advantage until the end of the match, leading to the  first penalty kicks that day. Only two rounds of penalty kicks were needed to determine the winner of this competition, because the players of Polonia Galway were 100% effective, scoring two penalties, while their opponents could not register.

This meant Made In Brazil met International in the third and fourth placed play off.

It was the latter who had more reasons to be happy because at the beginning of this competition they took the lead and led by two goals until the break. As the second half commenced they were close to increasing the lead, but football likes to surprise and when the Brazilians, who had look downhearted with the whole situation, finally managed to score a goal, before incredibly pulling it back  level, ending the match with a 2:2 draw.

This meant that we would witness the day’s second penalty shoots and second kicks taken by players from Brazil, who this time took the penalty kicks first and although they missed again in the second round, their team’s goalkeeper was flawless and saved both penalties made by players from Newbridge, indeed, huge praise is due to the International Newbridge players who left a lot of health and heart on the pitch.

However, the time had come for the grand final and the emergence of the first Ireland Socca Champions. In the group competition the players of Polonia Galway were better, and defeated Pericoloso 2: 1, but this is history and it did not matter, and it was at stake to win the historic title. The first part is a clear advantage of players from Waterford, who, thanks to two strikes by Przemysław Nuckowski, took the lead with two goals and this was the result of the first part of the match, in which the players from Polonia looked as if they had not grown into the game. Their terrible first half of the match and another conceded goal in the second minute after the change of sides did not fill the optimism of the players from Galway, who managed to answer only with a consolation goal.

Tomasz Szindler, of Leisure Leagues who organised the tournament on behalf of Ireland Socca heaped praise on the winners, saying: “The players of both Pericoloso Waterford and Polonia Galway approached the competition in the most professional way and no one should be surprised by their presence in the grand finale of the tournament, for which, on behalf of Ireland Socca, thank you very much and congratulations on your promotion to the Socca Champions League 2021 in Maribor, Slovenia.”

Tomasz also had the unenviable task of of picking the MVP’s and added: “Choosing the best goalkeeper of the tournament was not easy because both goalkeepers of the finalists presented a very high level, but we awarded the title to Krzysztof Kleczkowski, while the title of the best player of the MVP tournament went unanimously to the scorer of two goals in the final match, Przemysław Nuckowski, both Pericoloso Waterford players.”