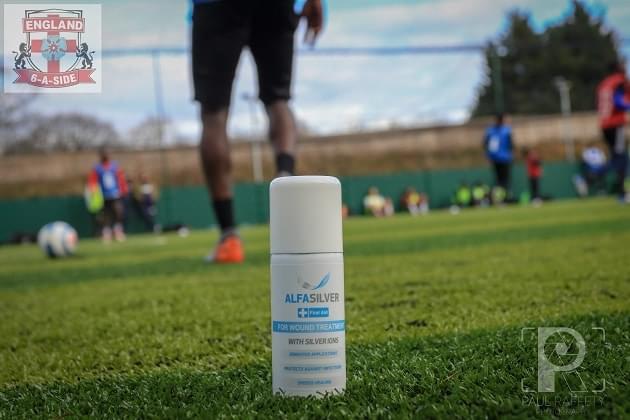 The ISF is delighted to reveal the name of the competition winners who have won the training session with the England team:

The lucky lads picked out of the hundreds of entrants are Revo 6-a-side, from St Austell in Cornwall.

As part of their prize, Revo, led by skipper David Waters, will now be attending the training session on 7th April, where they will not only get to showcase their skills alongside the England team, but also the chance to pick the brains of legendary former Man Utd, Aston Villa and WBA boss, Ron Atkinson, who is the England 6 a side team’s Director Of Football.

The event marks the partnership between ISF and Glenmark Pharmaceuticals who are the owners of the Alfasilver Brand.

As well as the prizes, there is a full afternoon of events planned: It will kick off with the presentation of winning kit. Before an introduction to England Team, support staff and Ron Atkinson, before the joint training exercise that will see Revo and the new-look Three Lions Squad put through their paces by Ron and boss Jamie Leggett.

After this, the England team will take on their Welsh counterparts in a specially arranged friendly match. Wales are the current holders of the Home Nations trophy, prevailing over England and Scotland and will be keen, no doubt, to maintain their advantage.

The match marks a vital next step for the both teams ahead of the World Cup in Crete this autumn.

Alfasilver Spray treats minor injuries on the go. Cuts, grazes, minor burns and blisters happen all the time. With Alfasilver Spray you can help to speed up the healing of the injury, even when it is in a difficult to reach place or it’s quite large. Which means you can get back to what you were doing.