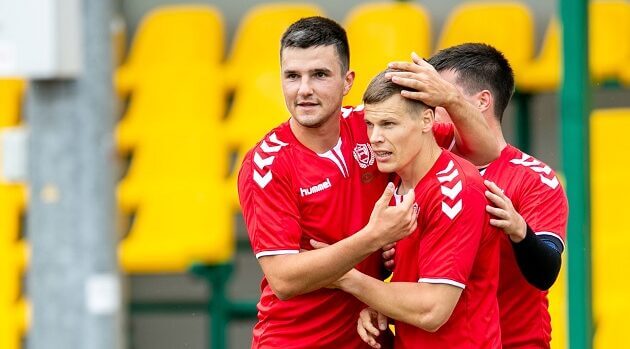 Last Saturday, the fourth round of the thrilling Lithuanian 7 a side Championship was played in Varėna city. We are already into the second half of the games and, three teams are clear. These, surely are who is going to fight for the medals in the final shake up.

Those teams are Kaunas Arsenalas, Jurbarkas Imsrė and Kaunas Hegelmann Minifootball – all of them won both matches played in this thrilling Varėna city round.

Although they had home advantage, FK Merkys was left without points in their own city after the fourth round. Despite performing well throughout against the leaders Arsenalas and Imsrė, Merkys were punished for one mistake and conceded a goal in both games and lost both matches with the result 0:1.

“We played really well against the leaders, the defense also worked well but it is a pity that we failed to score in any way. It is a bit sad that we did not reach the the heights, but our game is getting better” said a rueful Dmitrij Krupovič, the head of the Merkys team, after the play.

The main battle is between the three teams

Arsenalas, Imsrė and Hegelmann Minifootball all secured two victories in Varėna.  In addition to their single goal success against the hosts, Arsenalas managed to defeat Polivektris 6:2 before their  game against Merkys and Imsrė won with an identical result 6:2 against Polivektris, so we can safely say that the leaders of the championship are evenly matched!

Kaunas Hegelmann Minifootball  saw off FK Šilalė-Prolain won 3:2 in their first game of the day and and in the second game they celebrated an easier victory and broke SC-FK Akmenė 6:1.

All this means, after four rounds played and nine games, Arsenalas is currently leading the Lithuanian minifootball Championship with 22 points. Jurbarkas Imsrė has only one point less and Hegelmann Minifootball team has 19 points and are in a third position.

After this there is a gap to SC-FK Akmenė which is in the fourth place has only 13 points. With only two games left until the end of the championship, we are now able to say that there is a three horse race for honours.

After the Varėna round, the organizers of the championship traditionally chose the five most beautiful goals of the round, which can be voted on by clicking on the respective emotion.

Results of the Varėna round: