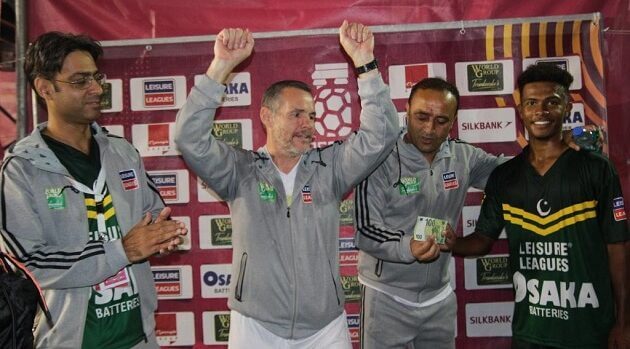 A month or so ago, we ran part one of a major interview conducted with Kevin Reeves. He discussed his early career, from the amateur boxing ring to coaching at some of the world’s biggest clubs.

Now, in part two the Staffordshire based coach talks about the time a year ago, when his boys – his team of young charges – took on the world. And caused a seismic shock!

“It’s a call you can’t turn down” reflects Kev as we speak. “I’d just finished a spell working at Nike Soccer Camps in China, so I did what I always do and sent my CV out there. Then I got a call from Leisure Leagues in Pakistan that gave me an incredible opportunity.”

Leisure Leagues Pakistan have, over the last few years, almost single handed, revived the sport of football in the cricket mad nation. From their launch, with the so-called “Ronaldinho and Friends” games – which drew world record crowds in Lahore and Karachi, the Trunkwala family have looked to professionalise not just 6 a side, but sport in general.

They have won awards from the UN for their work with women, have brought football to 80 cities from the mountains to the snowy wastes, but their first experience of the World Cup, in Lisbon, was not as successful as they had hoped.

All of which meant the challenge being put to Reeves was more than just a mere coaching one. “It was really appealing,” he recalls. “Ishaq Khan and everyone at Leisure Leagues wanted me to go out to the country and tour around, scouting the best players, coaching children. It was a wonderful thing to be involved in.”

Indeed, the work was similar to what he been undertaking in China. “In those camps,” he remembers, I’d been coaching teenagers soccer, just the basics, and educated Chinese coaches over a 6 week programme on various aspects of coaching.”

If that stood him in good stead, then he wasn’t prepared, perhaps for the welcome he got in Pakistan. “Everywhere we went everyone was so friendly, people just wanted to learn. It was brilliant.”

If he has nothing but fond memories of his visits to Pakistan, then one name above all others stands out to Kevin. “Gobar Zahman,” he smiles. “I worked with him a lot over there and he is an absolute top class person. Typical of the spirit of the nation.”

But there was work to be done, of course, once Reeves had soaked up the culture of his surroundings. Pakistan were towards the bottom of the world rankings, having lost three games in Lisbon and Reeves was tasked with building a whole new side. “It was tough,” he says now. “But there was talent, and there was spirit, there was youth and there was energy. The players were playing in Leisure Leagues up and down the land and they were absolutely desperate to do well.”

His squad selected, he was due to meet his charges in Crete, but Visa issues with the Greek Authorities meant some last minute changes, as he laughs now: “Well it wasn’t ideal! You could certainly say that!”

That overcome, the squad faced another challenge. The draw had not been kind, and they were in a very tough group. Not only were they to take on World Champions Germany, but also the dangerous Eastern European outfits, Slovenia, Romania and Hungary. “I’d watched those teams, and look, we knew it could be easier for us, but we just had to give our best.”

After a 4-1 defeat to Hungary (who have just become the latest nation to sign up to Leisure Leagues to run a league network) there then came a day that would alter the course of 6 a side World Cup history.

The youngest squad in the tournament took on Germany, who had won the crown the year before. And they knocked them out. A double from 17-year old striker Muhammad Waheed – the youngest player in the tournament and Leisure Leagues product – saw Pakistan run the German team close, and Germany were out on goal difference, and the shock was felt around the world. Indeed, Germany’s experienced goalkeeper and captain Kim Sippel called it: “the greatest performance in Pakistan Socca history”. The proud coach wouldn’t comment on that, but did add: “we gave a great account of ourselves that night and the boys couldn’t have given more.”

The dramatically improved showing for the Pakistan team helped them to 27th in the world when the rankings were announced – a huge jump and enough to put them above arch-rivals India, but for the coach it meant he wants more of the tournament: “It was a wonderful event. The best I’ve ever been at, the crowds, the organisation, I would love to be back and experience it.”

It also gave him a taste of commentating too. He acted as a summariser for some of the knockout games working alongside broadcasting legends like John Helm and Ron Atkinson on the ISF’s worldwide TV Coverage. “I’d love to do some more of that,” he confirms, “I’ve spoken with some of the local media in Staffordshire and I am waiting to see what happens.”

For now, though, Covid-19 has put an end to his globetrotting coaching career. “My wife is happy,” he smiles, “she was keen that I should stay at home anyway.”

The thing is, though, for men like Kevin, football is in the blood. And of course, in Reeves’ case he loves to explore. So even in 2020, there are suggestions of opportunities in the likes of Spain and Japan, but for now, he only wants to reflect on that incredible week last October. “My only feeling is pride.” He says, the emotion clear in his voice. “I am immensely proud to be part of it, but particularly for my players and all we achieved together. “

And if anyone was still unsure how much the world cup means across the globe, then these words should sound loud and clear. for the ordinary Leisure Leagues players of Pakistan and coaches like Kevin Reeves, it is everything.