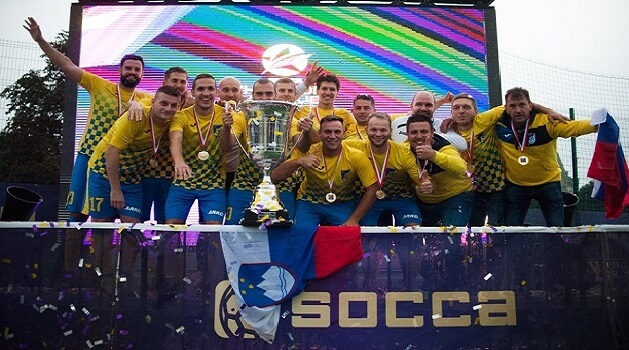 The side, from north eastern Slovenia, overcame reigning champs DYNAMIK TORUŃ 4-2 in a thrilling penalty shoot-out after a draw in normal time.

It was a fittingly wonderful end to the tournament, which saw four days of brilliant football in Maribor climax with the glory for Arko, who were joined by MFC SOFIA BÚLGARI on the winners podium after they overcame AP ZAGREB BLAŽEVIĆ MNK SASINA 7-4 in the third placed play-off.

ARKO KLJUČAROVCI had actually started the campaign with a defeat. 5-2 at the hands of WSH MATES TEAM, but after that won all their matches to spark joyous scenes.

Torun had arguably gone into the final as favourites, having won the competition last year, although they hadn’t found it easy, only qualifying in third spot in their group, but in the end, it was the team from Slovenia that prevailed.

A number of sides had sailed through the group matches with 100% records, but one of these, VINKOVCI AUTO SERVIS CRNAIC, lost out in the last 16 to the winners.

The group stages top scorers, AP ZAGREB BLAŽEVIĆ MNK SASINA smacked in an astonishing 28 goals in their three league games – including an incredible 8-8 draw with TAMWORTH BALKAN STARS – but lost out to MFC SOFIA.

In the end, it all came down to penalties, which you can see here:

Or go to Facebook for a full gallery and highlights of all three days.

All the results and group standings can be seen here