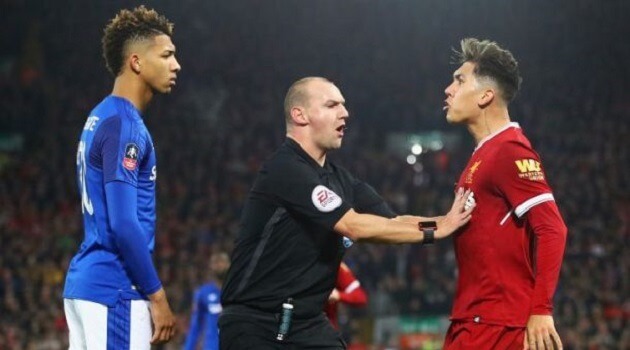 Last week we revealed that Bobby Madley – the former FIFA referee – had joined the ISF as our latest official.

Bobby has already told us about his love for 6 a side football and where he thinks his skills can best be transferred into the fast-paced game of Socca.

Now, in the second part of his interview, he talks about his career to date. Taking us on a journey from a record breaking season as youth striker to the very top of the game. He also gives his thoughts on the current footballing hot topic, VAR,  plus the importance of mentors and the affect of making a bad decision.

And wait for the player he most enjoyed refereeing….it is quite a surprise!

So first off, how did you get started? Did you always want to be a ref?
Not at all!! I was not a fan of referees when I played and showed little respect. I was a decent youth player and had spells at a couple of professional clubs but I didn’t make the grade. I played for my local team Ossett Town Juniors and still hold the record for goals in a season…91!

I became disillusioned with the game and after volunteering to referee at the junior teams summer gala one of the older refs said I was decent so I paid £15 and took the course.

Do you remember the first game you did?
My first game was Ossett Panthers Res v Walnut Tree Res in the Wakefield & District FA League. I was 16 at the time but I was tall so looked older. Going straight into open age football definitely helped me. In that first game I sent off two players from the same team for fighting during the match, the first and last time that happened to me!

What about your first professional match?
My first game in the Football League as a referee was Bury v Port Vale on 7th August 2010. This was such a special game to me as my mum and dad were in the crowd. My dad had recently been diagnosed with terminal cancer and to have both of them there was something I treasure deeply. He passed away in 2011 and never saw me referee in the Premier League so this match is one that I will always remember fondly.

What was your favourite game?
There are so many to choose from!! I think the Championship Play Off Final in 2016 between Sheffield Wednesday and Hull City is possibly my favourite. It’s the most financially lucrative game in world football and that brings a lot of pressure to a referee team. The fact that both teams were, like me, from Yorkshire made this an even more memorable occasion.

What about your least favourite?
Really any game that I felt I had a negative impact on the outcome with a wrong decision. I refereed Sunderland v Newcastle, a huge derby game as I’m sure everyone is aware. I have a penalty to Sunderland and sent off the Newcastle captain. Whilst the penalty was correct, the red card was not. It was 0-0 at the time and the game ended 3-0 to Sunderland. It’s never nice to feel that a mistake has had such an impact on a game.

And, you used to get a lot of the top Premier League games, may I ask something that has always interested me. If there was a decision that you maybe got wrong, how easy was it to switch off from the criticism of the pundits and did you ever feel they went over the top?
The pundits and press did not affect me. I knew when I had made a mistake and didn’t need the press to point that out. I’ve always been extremely self analytical and self critical. If I made a mistake I would spend a few days going over the decision on video and trying to work out why the mistake was made and more importantly what I can do to make sure that doesn’t happen again. Of course they would often go over the top but their job is to sell papers or increase viewing figures so as a referee at that level you learn quickly to understand that.

The crowd, Same question, really. I’ve watched football for 40 years and I have criticised referees from the stands, I’ll admit. Does that have any affect at all, when idiots like me are shouting all kinds of things
In the professional game not at all. You really don’t hear the crowd at most stadiums as you are concentrating on the match and you also have a microphone in your ear with constant chat. It’s actually more difficult in semi professional football with crowds under 1,000. You can hear everything that’s said there in often tight stadiums. In these games you have to quickly develop a thick skin and learn to trust your own ability.

VAR: What are your thoughts? Vital help or unnecessary intrusion.
Vital in ensuring that the big game changing mistakes are rectified, however my feeling is that it should be used as sparingly as possible to ensure the flow of the game is not affected. I’m a purist and love football in its simplest form but I do understand that in 2019 with the amount of money at stake in the game that huge decisions should be correct if the technology is there to do so.

How are you finding things in Norway? Better, worse, are the players more respectful?
I’m really enjoying refereeing in Norway. The level of course isn’t the same as the Premier League but every game is treated as a cup final by the players so the games deserve the same amount of respect and professionalism from me. The players speak great English which helps but yes if I make a mistake they are sure to let me know!

And the last serious one: I have spoken to referees before about mentors. It appears vital to development, who was yours?
Throughout my career at the various levels I have always had people who were prepared to give their time and experience to help me. Steve Lodge, former FIFA Referee, was influential in my early career. One person who had a real impact on my development throughout my career was Trevor Simpson. A former top level referee himself Trevor became one of the country’s most respected coaches. He played a key part in the likes of Howard Webb, Martin Atkinson, Michael Oliver, Craig Pawson and many more. Trevor is a straight talking Yorkshireman and his advice to me was pure gold. His grandson, Lewis Dawson, is moving his way up the levels now and is a superb young prospect…with his grandads advice then I’m sure he will do very well indeed!!

And just for fun…dish some dirt. Who was your toughest player to ref?
I loved a challenge but I liked to work with players who were tough but respectful. Joey Barton was a player I would have avoided a tackle with him, but as a referee he was fantastic! He worked with me if I needed help with one of his players and was a player I really enjoyed refereeing. As for the difficult ones, I’ll tell you them when I’ve finished my career!! You never know who might end up in management one day and paths cross so I won’t create any problems for myself by answering that one just yet.