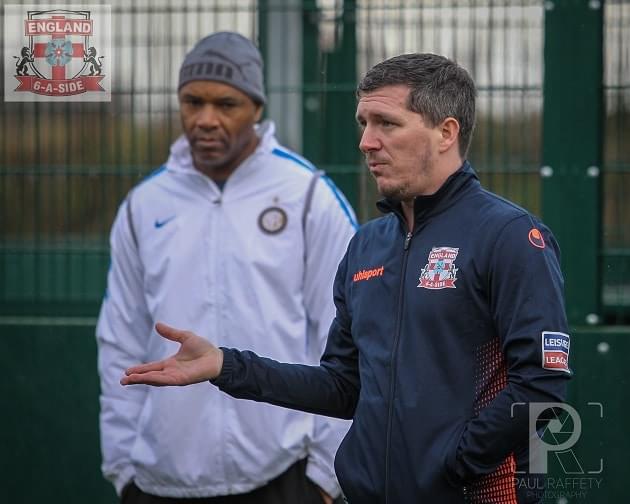 As reported last week, the England team began its journey to the Crete World Cup in 2019, with a host of new players under the watchful eye of the new man in the hot seat and Jamie admitted he was pleased with what he had seen.

“Most definitely,” he said, “this is just the start. It’s a new beginning for everyone. Me, the players, we are all in this together. We only have two players remaining from the previous squads – Callam Gardner and Dean McDonald – and the rest are all players I am aware of as some of the top operators on the national 6 a side circuit, with some of the real elite clubs.”

Having such a selection to pick from, said Jamie, was going to make for a tough decision before the full training squad for the World Cup was announced. “There is proper talent, proper quality, and there are going to be some good players who are cut from the squad that we’ll move forward to training with after the next session is done in March.”

Jamie moved to England after a spell in charge of the Scotland team – who he led to the Quarter Final of the first World Cup in Lisbon. During his tenure the Scottish side became synonymous with skill allied to a real passion and will to win and Leggett stated that he was looking to bring exactly that to the squad, but he warned: “It won’t be easy. We know there’s high expectations on our shoulders, because we are England, but we have to relish that, not be afraid.”

The tournament in Crete will give Jamie the chance to work with Ron Atkinson. The giant of the game, a former WBA and Manchester United Manager amongst many others, was announced as the England Director Of Football before Christmas, and Leggett admitted he couldn’t wait to meet the legend. “How can I not learn from him?” he suggested. “A man like that who has done what he’s done, I can’t wait to pick his brains and hear some of his stories.”

However Jamie did cheekily suggest that the learning curve might be a two-way street, “well, after all,” he smiled, “Ron might not know as much about 6 a side as me, so he might learn something too!”

The tournament in Rethmyno will be held in a glorious beach-side location and Jamie excitedly admitted he couldn’t wait. “The tournament in Lisbon was immense, everyone at the ISF gave us an amazing set up and no doubt this one will be even better. The standard of football was incredibly high, and we will be ready to meet the challenge.”