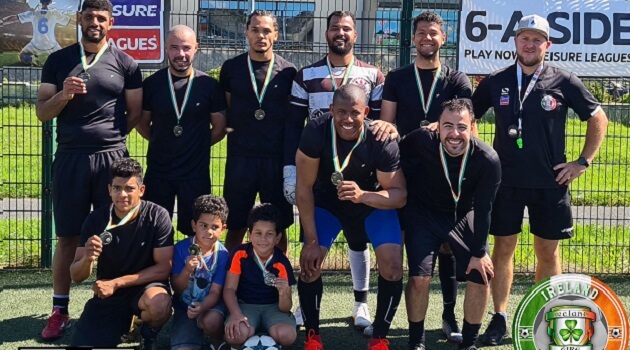 This weekend, the qualifying event for the Ireland 6 a side tournament moved to Galway.

This time, six teams took part in the matches , which competed in one group played by a round robin league system.  four local teams Hotshots Galway, Made In Brazil (MIBR), were in attendance and the Polonia Galway team – who also provided much needed support to the organisers –  who entered two teams. The field was completed by visiting sides – Ballina Boys on Tour and a participant of the 2018 Socca Champions League – Drink Team Cork.

In the first match, the Brazilian team faced the guests from Ballina,  who, in the first half had a slight advantage over the hosts, but in the second part one of the favourites of this round emerged. Playing calmly and with full awareness of their skills, it was the MIBR players who could be proud of their victory, knocking in seven goals on the way to victory.

At the same time, the second team of Polonia faced the next guests, the aforementioned Drink Team from Cork. Here, too, the hosts were not hospitable, winning with two goals scored in the first part of the match. This turn of events greatly complicated the situation for Drink Team players who came here to advance to the final stage of the championship.

In the next matches the players of Polonia Galway and Hotshots faced off, both teams quite nervously started the competition, but the experience of Polonia players (who took part in the Socca Champions League last year) paid off and they turned out to be a better team in the competition for the first place while their opponents showed in this match that they will be a team to be reckoned with.

When Drink Team took on MIBR  there was another show of Brazilian players’ dominance, despite many efforts of the experienced Cork team goalkeeper, they couldn’t stop the attacks of their dashing opponents, who sent away the visitors with a five goal defeat.

The third series of matches played on two pitches was a rivalry between Hotshots and Ballina, both smarting after their defeats perhaps the pick. In this match, the team from Galway, who controlled the course of the game from the very beginning, was able to defeat the opponent 8:1. From that moment on, players from Ballina fought only for honour.

In the second match played simultaneously, both Polonia Galway teams faced each other and in this match the first team players turned out to be better, beating their friends and fellow squad members, but despite the high scoring result it was not an easy match for them.

After a short break, the teams returned to the competition and in the MIBR versus Polonia II game there was no surprise and the South American players once again sent their rivals packing with a 5-1 loss. Meanwhile, the first team of Polonia in the match on the next pitch faced the team from Ballina and they too ran out 5 to 1 victors

In the fifth series of matches, MIBR played with Hotshots and here, in the moments of very nervous rivalry between both teams we witnessed the only goalless draw that day and Hotshots players managed to stop the quick-breaking players from Brazil, who showed all their samba skills. On the second pitch, players known from competing at the Socca tournaments – Drink Team and Polonia Galway. The competition was very fierce, but with an advantage on the side of the host players, who won both halves by one goal and ruined Drink Team’s chances of advancing from third place in the process.

The next match is the second team of Polonia Galway versus Hotshots and here the Irish team quite quickly managed to take the lead by two goals, but they had just a little too much self-confidence, the Poles managed to equalise and the result did not change by the end of this match, despite many attempts after both sides of the field. Ballina versus Drink Team, meant a lot, as it was a clash of two teams that have not managed to win a single point so far, and here the experience and internal frustration of the Drink Team players allowed them to win 6 to 1.

The penultimate series of matches saw a game between Ballina and Polonia II and also in this match the players from the lowly Ballina had to recognize the superiority of their rivals, losing another five goals and scoring only one, thus ending the competition in the last place and without a point.

In the second fixture of this round, Hotshots turned out to be better than Drink Team players, winning the match quite confidently 3 to 1, this match had massive ramifications for the table – not least of which was that Hotshots unexpectedly qualified for the final tournament in third place, and Drink Team will not have good memories from their adventure in Galway, as they finished in 5th place.

The last match was one the tastiest of the day. The leader of the table Polonia Galway versus their nearest challengers MIBR. Those who watched the competition so far, would have observed that it is no coincidence that these two teams will compete for the first place in Galway.

From the first games, both teams showed that they were interested not only in promotion, but also in victory in the entire tournament. The first half was very balanced, the action was moving from one goal to the other and both goalkeepers had their hands full and were right in the action. The Brazilian team managed to take a one-goal lead in this part of the game, but more thrills were ahead of us. In the second half, things remained the same,  until only two minutes before the final whistle the emotions reached its zenith. It was then, after a shot by a Polonia player from outside the penalty area,  that one of the MIBR defenders stopped the ball with his hand for which he saw a yellow card and got two penalty minutes in the sin bin, from then until the end of the match it was known that Polonia would be playing with one player advantage.

When Polonia managed to equalize one and a half minutes before the final whistle, no one took into account that the Brazilians would be able to turn the tide of this match again, and certainly no one thought that this player would be an excellent goalkeeper from Brazil, who with a fantastic shot from a distance, screeched one past the helpless goalkeeper of Polonia Galway, half a minute before the end Polonia had to go for it, and were picked off on the break again..

After all of that, three teams went to the final. BIG congratulations to the Brazilian team 🥇MIBR and also to 🥈 Polonia Galway and 🥉 Hotshots, who are also on their way  to the final tournament in Cork.