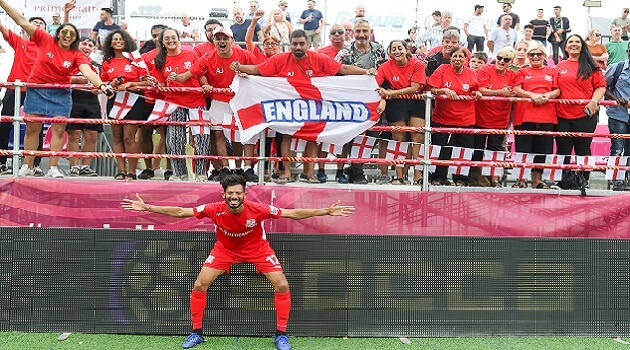 Arjun’s Army. They lit up the world cup in Crete with their songs and their flags and their unwavering support for the UK teams. So, we could not think of anyone better to be the star of the St George’s Day edition of the Self Isolation fitness series, than the man himself.

Arjun Jung took to his garden this week for the latest instalment of the popular feature in which Leisure Leagues – the world’s largest sports league provider and the driving force behind the England team – take you through some drills you can do, while you are all itching for football to return.

The young South East based player was one of the stars as the England team reached the quarter finals in the incredible week last Autumn, which Arjun himself said was “the greatest week of my life” in one of the interviews he did after the tournament.

While the leagues are in lockdown like everything else at the moment, we can’t make any announcements about the future just now, but things are happening all the time, and we will be letting you know the latest as soon as we can.

In the meantime, let Arjun take you through his drills, and keep following the Leisure Leagues Facebook page for the very latest on the finest international football tournament’s in the world.

The world cup in Crete, in beautiful Rethymno saw 32 teams from every corner of the planet battle it out in a purpose built stadium right on the beach.

Crowds of thousands were often forced to watch on specially erected big screens in the beach side bars such was the clamour for tickets that saw the “Sold Out” signs go up many times.

In the end, England – and Arjun – were edged out by hosts Greece, in a fixture that is considered the finest in the tournament’s history.

Russia won the title in the end, seeing off a hugely spirited Poland in the final – and once this Coronavirus crisis is behind us, we can look forward to it all over again.