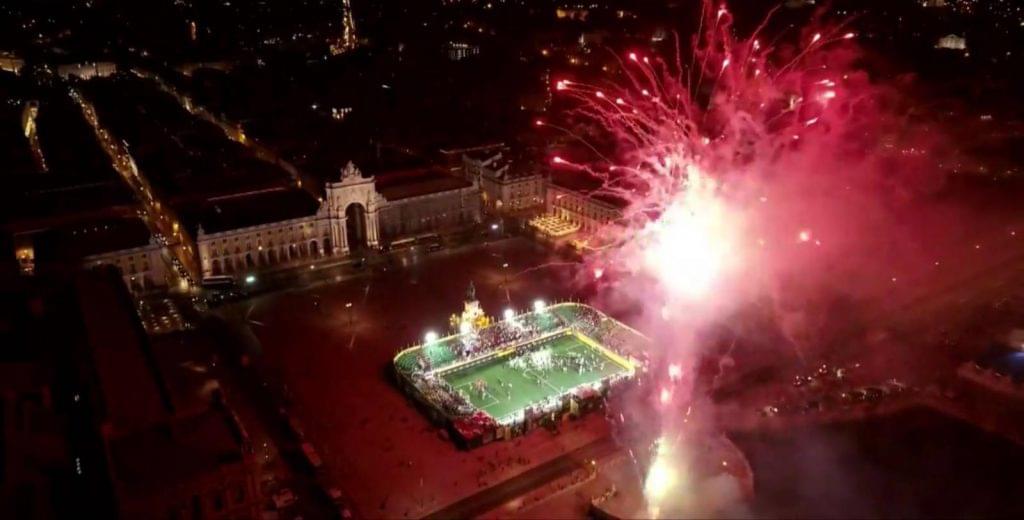 The inaugural 6-a-side Socca World Cup, hosted by the International Socca Federation, finished with a glittering display of fireworks in Lisbon’s old harbour overlooking the stunning picturesque specially constructed 4,000 seater stadium in the Praça do Comércio. The event featured 32 nations from all over the world and ended with Germany being crowned the inaugural World Champions, beating Poland 1-0 in a breath-taking final watched by a full house.

The multi-million dollar event marked the first stage in the ISF’s goal to be small-sided football’s equivalent to FIFA, who control the 11-a-side game, and marked a turning point for small-sided football, or socca as it will now be known, throughout the world.
In the tournament itself, France, the pre-event favourites, lost 2-0 to hosts Portugal in the quarterfinals following referee Mark Clattenburg’s decision to send off French defender Belbachir for misconduct.

Poland were the surprise package reaching the final by overcoming teams such as England in the quarterfinals, who themselves had knocked out Brazil following a penalty shootout in the Last 16.

Viewing figures for the event, which was streamed across the world, and shown on state broadcasting channels in a number of countries, have been recorded as 23 million viewers which is a record for any small-sided football competition anywhere in the world.

Tim Ollerenshaw, Vice-President of the ISF, commented “this was an extraordinary spectacle in one of Europe’s great major cities, and already we have seen an influx of interest and members from countries around the world after the event wishing to join the ISF. For our 2019 World Cup our aim is to get as many of these countries participating with their national teams as possible, as well as offering those countries extra benefits both via entrance to club competitions and business opportunities through our partners.”

Apart from the big name countries with strong footballing traditions, other countries made an impact such as USA, entering their first international competition, and were unlucky to lose out in the quarterfinals to eventual winners Germany after a penalty shootout, and their goalkeeper, Andrew Weber, was voted player of the tournament.

Shahzeb Trunkwala, Vice-President of the ISF, commented “ this tournament also gives an opportunity for some of the less well-known footballing countries, such as USA, India and Pakistan, to make their mark on the international stage, where otherwise they would struggle in the 11-a-side format of the game, so 6-a-side is a great leveller in that respect and the USA certainly showed how much can be done by a traditional non-footballing national when they put their mind to it. They certainly came across as a very professional outfit, and could easily have won the whole thing.”

Mr Trunkwala continued “we are only accepting one organisation from every country, and that organisation will hold the licence and it will be quite lucrative to be a member of ISF and we are looking to increase the number of teams at our 2019 World Cup.”

Already 30 new countries are in negotiations with ISF to become new members and the Federation plans to hold its Annual General Meeting of members in the UK in February 2019.