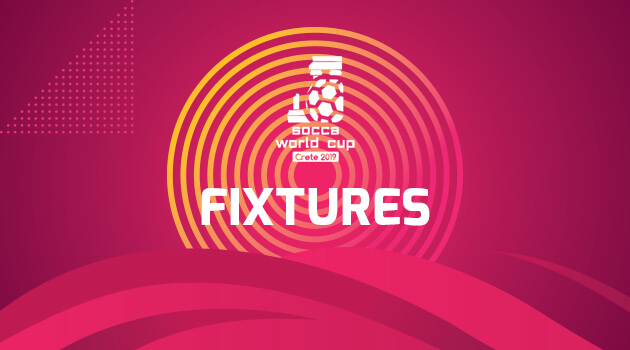 What can we say? In two weeks’ time, the 2019 World Cup gets underway.

At 11am (Greek time) on 12th October the first match will kick off – now we can reveal the fixtures to you!

Latvia and Egypt will have the honour of playing first in front of the waiting world, with a full programme of 13 games on the first day, including holders Germany taking on Hungary at 7pm.

Sunday looks a mouth-watering day. The official opening show promising all manner of surprises kicks off at 8pm, followed by hosts Greece playing Mexico in what is sure to be a packed, pulsating stadium.

The final game of that day will see that part of Crete turn South American for an hour as Brazil face Colombia.

With a full six days of group football concluding with a 7pm kick off on Friday 18th with USA looking to show their form against new boys Nigeria, the nitty gritty of the knockout stages get under way.an hour later.

What is sure to be dubbed “finals day” is Sunday 20th October as two thrilling semi-finals, a third and fourth place play-off and the final all taking place.

The final will start at 9.00 Greek Time.

All fixtures are below, so you can plot your country’s route to the final!

You will be able to follow all the action here: https://soccafederation.com/competition/crete-2019/